Arachnophobes, you’ve been warned. With over 43,000 species of spiders roaming our earth, it’s no surprise that you can find some giant variations among them. Spiders are usually harmless, but that’s often believed to be due to their size difference from humans. So does this mean that bigger spiders pose more of a threat?

It’s thought that less than 30 species of spider can actually cause harm to a human, and this is because of venom potency. The size of a spider has little impact on how dangerous it is, but just because they can’t hurt you, doesn’t make them any less terrifying.

From the furthest corners of the earth to our own backyards, this guide looks at nine of the biggest spiders in the world and where you can find them. We thought the cellar spiders in our bathrooms were big enough, but wait until you see these ones. Let’s get into it.

If you’re heading to Colombia or Brazil, look out for these eight-legged beasts. Thought to be one of the most beautiful spiders in the world, as well as the biggest, the Colombian Giant Redleg Tarantula is a species of bird-eating spider that has distinctive red-orange leg hairs and a brown body.

Nocturnal and very timid, sightings of this spider are rare. Still, with a leg span of around seven inches in adult females, you’ll know if you’ve seen one. Male Colombian Giant Redlegs only live around four years, but females can exceed 20 years as they’re good at fighting off potential predators.

The spiders will spin and bob when nervous or sensing danger. Using hidden spiky thorns on its back legs, it can stun victims before sinking its teeth into them. Colombian Giant Redlegs are venomous, though this venom is not thought to be deadly to humans. Bites can cause nasty infections and these species are skittish and unpredictable. Keeping your distance is advised.

Don’t recoil at this spider’s name. Unlike bird spiders, the Hercules Baboon doesn’t feast on apes. Instead, they are actually often eaten by baboons, but this doesn’t make them any less formidable and they’re especially defensive towards primates and humans as a result.

Found in remote parts of East Africa, these spiders are reclusive and solitary. Biologists have only ever collected one Hercules Baboon Spider in Nigeria in the 1900s and you can see it on display at London’s Natural History Museum. With sightings being so rare, its population remains in question and very little is known about this species. Still, it’s thought to be the heaviest spider ever caught and the rarest in the world.

Its brother, the King Baboon, has a stable population, and predictions about the Hercules Baboon Spider’s social behaviors can be made from this species. Both species are types of tarantula and the King Baboon is also impressively large, reaching almost 8 inches in leg span. These burrowing spiders use their back legs for digging and it is thought the Hercules Baboon has managed to remain out of sight from humans for so many years for the same reasons.

Now, this spider’s name can be taken a bit more at face value. Discovered in Sri Lanka in 2013, the Face-sized Tarantula, officially Poecilotherria Rajaei, measures 20 centimeters in leg span and its circumference has been compared to that of a dinner plate.

It might be harmless to humans, but its huge and distinctive body is arguably disturbing. Still, it is an impressive tarantula nonetheless and appearances have become more and more common since the spider has taken to human dwellings for shelter.

Usually favoring decaying trees and rural woodland, these spiders have started to move inside as a result of deforestation, much to the surprise of residents in northern Sri Lanka and India. But luckily, they are not lethal to humans and are usually very shy.

These tarantulas have striking yellow banding on their legs and pink-white banding around their bodies. Their diets consist of birds, lizards, rodents, and even snakes, some of which are twice their size.

With a ten-inch leg span, this spectacular spider inhabits the remote areas of Brazil, Argentina, and Paraguay and carries enough venom to take down its fowl prey. With a dark brown body, salmon-pink markings, and long furry legs, it looks just as intimidating as the name implies.

Because of the sheer volume of poison, this Birdeater carries and its mechanical, inch-long fangs, this spider is capable of delivering a painful bite, but will only do so when provoked. Although unlikely to kill a human unless left untreated, when this spider does bite a smaller victim, it releases fluid to partially digest the creature, hence why it can attack such large prey.

Also known as “armed spiders” in Portuguese because of their powerful venom, the Brazilian wandering spider has a six-inch leg span and crawls the jungle floor at night rather than residing in their lair or a web. They’re among the most venomous spiders in the world and one that can be lethal to humans.

Aggressive and defensive, thousands of bites are reported annually, which is rare for spiders. But a powerful anti-venom prevents death and direct fatalities are uncommon. Still, you wouldn’t want to aggravate this hunter and their long hairs make their large bodies appear even bigger.

They live under logs in the day and feast on insects, small amphibians, and mice. You’ll find them in Brazil, Costa Rica, and Argentina.

Though not deadly to humans, camel spiders can deliver a painful bite and they’re voracious predators of their insect prey. With an approximate six-inch leg span, they’re one of the fastest spider species and can move at speeds up to 20 miles per hour.

They’re known to sometimes emit a buzzing sound like a call to mates or a sign of feeling threatened, but they carry no venom and feast on insects, rodents, lizards, and small birds by utilizing their strategic front pincers and sharp fangs. In fact, their jaws account for 33 percent of their total body length, leaving little hope for their victims.

They live in the warm desert plains of Iran, Iraq, and Egypt and have earned their name from their tendency to lay eggs under camels’ skin. They’re well suited to their dry and dusty habitat, with large, tan, and hairy bodies with a translucent tinge resembling that of a scorpion. They’re also known as wind scorpions for this reason as well as their impressive speed.

Camel spiders are nocturnal and only hunt at night. They might be considered the stuff of legends to many, but they’re very real, although they are not quite as threatening to humans and they may first seem.

Another South American hunter, the Brazilian tawny red tarantula can be found all over Brazil, Uruguay, Paraguay, and Argentina. Although boasting just a 2.5-inch long body, its legs are usually the same size, and the diagonal span can be as much as 10 inches. With reddish hairs and dark brown furry bodies, they’re typically recognized by the white stripes across their legs. They’re likely to scuttle and throw pointy hairs called urticating hairs towards any threat.

They’re skittish and easily spooked but generally considered aggressive in temperant. They are typically burrowing spiders and will hide from danger. Without the right environment, they will attack. Large fangs mean they can deliver a painful bite to humans if they want, but this would generally only be if they’re unable to hide.

With potent venom and formidable predatory tactics, they’re capable of feeding on birds and small rodents, but their diet mostly consists of crickets and roaches. Females hatch several hundred spiderlings at a time and they can live as long as 15 years.

The Giant Huntsman is the world’s largest spider in leg span with its eight crawlies reaching 12 inches from one tip to the other. These formidable predators don’t build webs to catch prey but actively hunt and can move up to three feet in just one second.

You can find huntsmen all over the world but the giant arthropod, discovered in 2001, only lives in the dark, damp caves of Laos in Southeast Asia. With crab-like legs and twisted joints, they scuttle side to side.

Female huntsmen also have distinct mating rituals. In sac-like cocoons, they lay up to 200 eggs at a time which she then guards instinctively. The female huntsman then tears open the cocoon when spiderlings are ready to hatch and can stay with them for up to several weeks.

The Goliath birdeater is the world’s largest spider in mass, and as the name implies, the species can eat just about any small animal from birds to mice to frogs, lizards, and invertebrates. It can grow up to 11 inches in diameter and live up to 20 years. The Goliath birdeater is a species of tarantula that inhabits northern South America.

Although deadly to small creatures, their venom is not lethal to humans but a bite would hurt like a wasp’s sting. The Goliath birdeater is actually a delicacy in some parts of the continent where its urticating hairs are burnt away before the body is roasted in banana leaves.

These spiders are nocturnal and live in burrows that have been abandoned by small animals like moles and voles. They are solitary and only have partners for mating. They’re known to be very aggressive and defend themselves by emitting a piercing warning sound and throwing barbed hairs from their abdomen.

Where is the largest spider in the world?

Birdeater tarantulas and the giant huntsman are the world’s largest spider species. You can find the Goliath birdeater in northern South America, the largest spider by mass, while the giant huntsman which steals the victory on leg span only inhabits the dark caves of Vang Vieng in Laos. South America is home to the highest concentration of giant tarantula species and you’ll find them in warm rainforest environments away from human civilization.

Although often scary in appearance, most spiders are largely unharmful to humans as their venom is designed to work on their small victims. Bigger spiders can carry more venom and have larger fangs, but many carry no poison at all and pose just as much of a threat to humans as smaller species. Bites should always be treated and kept clean, but the biggest risk of a spider bite is an infection or allergic reaction.

How big is the most venomous spider?

The Sydney funnel-web spider measures just 0.4 to two inches on average, with 2.5-inch legs, but it carries more venom by volume than any other spider in relation to its size. This doesn’t mean that humans are at more risk of harm if bitten, but their small insect prey stands little chance. Still, their venom could irritate human skin and should be treated to prevent persisting symptoms.

Dangerous Animals in Australia: 9 Species to Look Out For

The Largest Animals In The World: 9 Humongous Species 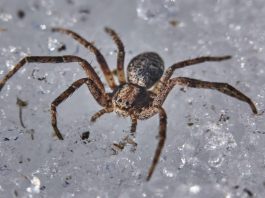 The 9 Most Venomous Spiders In The World