Home North America Mexico The 7 Most Dangerous Snakes in Mexico

Spanning almost 2 million square kilometers, Mexico has a wide range of different ecosystems. It’s unsurprising then that the country is home to a huge diversity of wildlife. To be precise, there’s over 800 species of reptiles, 500 species of mammals and the highest number of rodent species in the world. And of course, there are plenty of dangerous snakes in Mexico!

There are roughly 381 species of snake in Mexico, but luckily the majority of these aren’t venomous. Nonetheless, there are 7 dangerous types of snake that you should watch out for. They are divided into four main groups: vipers, coral snakes, sea snakes, and colubrids.

Whether you’re planning a trip to Mexico, or simply keen to learn more, read on for our guide of the 7 most dangerous snakes in Mexico.

The Querétaro dusky rattlesnake is a venomous pit viper found in the highlands of central Mexico. Its specific name Crotalus aquilus reflects its habitat – ‘aquilis’ means eagle in Latin, referring to the rattlesnake’s proclivity for high altitude terrain. These heavy-bodied snakes typically grow to around 50cm long. They vary in color – males have a greenish or yellowish tinge, whereas females are more often brown or gray.

The dusky rattlesnake has a strong venom and should always be given a wide berth when encountered in nature. Their hemotoxic venom causes significant damage to the circulatory system and muscle tissue and can lead to swelling, hemorrhage, and tissue death. As with all rattlesnakes, the snake will vibrate its tail when agitated. Luckily, unless hiking in the mountains of central-southern Mexico, it’s very unlikely you’ll even encounter a Querétaro dusky rattlesnake.

The banded rock rattlesnake is one of the most dangerous snakes in Mexico. These venomous pit vipers are native to the Northern states of Mexico, including Baja California and Chihuahua. They are recognizable by their light gray bodies featuring darker gray or black banding.

As their name would suggest, banded rock rattlesnakes love hiding in rock crevices. Relatively shy, you probably won’t hear these snakes rattling away. They prefer to camouflage into their rocky habitats and stay well out of sight from humans. They will, however, attack if approached. Their potent hemotoxic venom attacks the circulatory systems of their prey, and the venom of some populations of this species also has a neurotoxic effect, shutting down nervous systems.

Luckily, you won’t encounter a banded rock rattlesnake in any of Mexico’s more built-up, popular areas. These nocturnal, secretive snakes prefer to hang out in canyons and other dry, mountainous regions. The most likely time to catch a glimpse of one is after a thunderstorm or rain shower on a summer’s day, when the serpents venture out of their rocky homes to bask in the sun and search for food.

With vibrantly colored bodies banded in red, yellow, and black, coral snakes may look pretty – but don’t get too close! Coral snakes – or coralillos as they are known locally – are one of the most deadly species not only in Mexico but in the world. Their neurotoxic venom is second only to the black mamba in terms of its potency. It causes rapid paralysis and respiratory failure in its prey. The effects of coral snake venom take a fair bit longer to manifest in humans, but early signs such as slurred speech, double vision, and muscular paralysis are signals that antivenom is urgently needed.

However, while coral snakes’ venom is incredibly potent, they are generally considered less dangerous than rattlesnakes. This is because coral snakes have weaker teeth and a less effective poison-delivery system, which relies on a chewing motion that is far more effective on frogs than it is on humans. What’s more, coral snakes are fairly reclusive. Hiding under rocks and piles of leaves in forests and woodland areas, they do their best to keep out of the way of humans. They’ll only attack when handled, so don’t be tempted to pick them up!

The Fer-de-lance is a highly venomous pit viper native to South and Central America. Terciopelo, equis, nauyaca, this snake has many different names, varying from country to country. The French version, Fer-de-lance, translates as ‘spearhead’, referring to their broad, flattened, V-shaped heads. These snakes are generally olive green in color with dark markings and can grow between 5ft and 9ft long.

The Fer-de-lance tends to be found in lowland habitats such as forest areas and riverbanks in southern and eastern Mexico. Unlike many of the snakes on our list, the fer-de-lance is not afraid of humans. They’ve been known to slither into areas populated by humans, and often exhibit aggressive and unpredictable behavior. This makes them by far one of the most dangerous snakes in Mexico. Indeed, they are the leading causes of snakebite in Yucatán. With hemotoxic venom that causes a wide variety of nasty conditions, such as necrosis and internal bleeding, it’s best to keep an eye out for these dangerous beasts when in Eastern parts of Mexico.

Not all of Mexico’s most dangerous snakes live on land. Known locally as the serpiente marina amarilla, the yellow bellied-sea snake can be found swimming in warm waters off the coast of Mexico. These snakes are short and slender – reaching just 35-inches in length, with brown upper bodies and yellow bellies. They can stay underwater for up to 3 hours, and are sometimes seen in groups of thousands, drifting on the tides to wait for prey – a terrifying sight for an unlucky swimmer!

Yellow-bellied sea snakes feed on small fishes and eels. Lying motionless on top of the water, sea snakes impersonate floating pieces of driftwood, fooling their prey into taking shelter underneath them. They then dive down, inject neurotoxic venom, and swallow their prey whole. While their venom is dangerous to humans, they tend to be timid creatures that avoid contact, therefore posing little threat to swimmers. With plenty of antivenoms available to neutralize their venom, there have been no recorded fatalities from a yellow-bellied sea snake bite.

The twin-spotted rattlesnake is a relatively small and slender species of venomous pit viper native to the southwestern USA and northern Mexico. The twin-spotted rattlesnake is easily distinguished from other species of snake by the two lines of dark spots that run down the length of their bodies. They tend to have brown, gray, or occasionally green bodies.

If you’re from Arizona, you may well be familiar with this species of snake, which populates high elevation forests in the state’s mountainous regions. In Mexico, it occurs in the Sierra Madre Occidental mountainous region in Sonora, Chihuahua, and Durango.

While this snake may be smaller than some of the other ones on our list, its venom packs a punch. With hemotoxins that attack the circulatory systems of its prey, any bit from a twin-spotted rattlesnake should be considered life-threatening and a cause for immediate medical attention.

The last on our list of the most dangerous snakes in Mexico is perhaps the most deadly. The mojave green, or mojave rattlesnake as it is also known, is a highly venomous species of pit viper common in the deserts of central Mexico. Typically growing between 3 and 4 feet, the mojave green’s coloring varies between dusty brown and light green. It can be recognized by a darker diamond pattern on its back, and wide white stripes near the end of its tail.

The Mojave rattlesnake is one of the world’s most venomous snakes. Its neurotoxic venom is considered to be one of the most debilitating and potentially deadly of all rattlesnakes. They have a tendency to act aggressively towards humans. Like most rattlesnakes, you can usually hear their tail rattling before you see them.  Bite symptoms include vision impairment, difficulty swallowing and speaking, and respiratory failure. However, the wide availability of antivenin for this variety of snake means that chances of survival are very good if medical attention is sought as soon as possible after a bite.

Mojave greens tend to lurk in the open and arid areas, such as high desert or lower mountain slopes. Keep an extra eye out for this deadly species if you happen to find yourself in the deserts of central Mexico. And whatever you do, don’t pick one up – even if it’s dead, their venom can still be effective long after they have died!

However, chances for survival are very good if medical attention is sought as soon as possible after a bite. There have been reported incidents in Red Mountain California of people finding dead snakes, getting pricked by fangs, and succumbing to postmortem envenomations.

What is the most poisonous snake in Mexico?

The most poisonous snake in Mexico is the mojave green. This green-hued rattlesnake has one of the most potent venoms of all the snake species in the world. With highly neurotoxic venom, bites by this species of snake have been known to cause sight impairment, difficulty swallowing and speaking, and even respiratory failure. Luckily though, there’s a good availability of antivenin to treat bites from mojave greens, meaning that fatalities are very rare.

How many poisonous snakes are there in Mexico?

There are seven types of poisonous snakes in Mexico. The majority are pitvipers, including the Querétaro dusky rattlesnake, the banded rock rattlesnake, and the fer-de-lance. There are also snakes in the waters of Mexico, such as the yellow-bellied sea snake.

Are there poisonous water snakes in Mexico?

Yes, the yellow-bellied sea snake is one of the most poisonous water snakes in Mexico. They can be found drifting in the waters off the shores of Mexico, sometimes in groups of thousands. They have strong neurotoxic venom that can be dangerous to humans, however, they don’t tend to exhibit aggressive behavior, striking only when handled or stepped on by swimmers or divers.

Wondering what other critters to watch out for in Mexico? Check out our list of the most dangerous animals in Mexico. 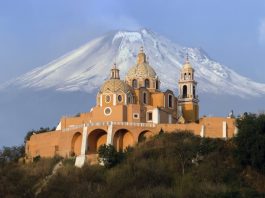 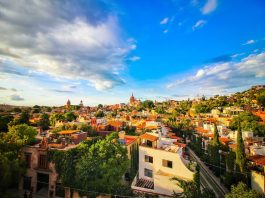