Home Europe Turkey Is Pamukkale Worth Visiting? 7 Reasons To See This Town

Is Pamukkale worth visiting? You asked. We answered. This guide aims to reveal why Pamukkale continues to reign as one of the must-see spots in Turkey. We’ll pick out seven reasons why we think you should totally have it on the travel itinerary this year, highlighting the incredible scenery and the rich history alike.

Cascading down the sides of the hills of Denizli Province, Pamukkale is a symphony of glowing white travertine terraces doused in turquoise spring water. The name translates literally to ‘cotton castle’ and it’s easy to see why, as 10,000 shades of white, off-white, cloud-white, and cotton shimmer under the Turkish sun thanks to the strange rock formations. We’d put it up there with one of the most incredible landscapes in the world – not just in Turkey!

But it’s not just the nature that the estimated two million people come for. The ruins of the two-millennia-old spa town of Hierapolis are an enthralling way to taste the deep history of this part of Asia Minor, too, while some say the hot air balloon rides here can rival those over in Cappadocia. And that’s really just scratching the surface…

Is Pamukkale worth visiting for the travertines alone? The truth is that most people do just that. These are the features of the town that have really put it on the map. They’re essentially a series of stepped calcium deposits that have built up over the millennia from the flow of the underground hot springs. Today, they form strange pools that roll from the clifftops down to the village in a series of photogenic ridges and drops.

Sadly, booming tourism numbers and the growth of the nearby town have both taken their toll on the natural travertines of Pamukkale. They’re still an awesome sight to behold, but much of the original water flow has now dried up. Visitors also have strict rules to follow. First off, you can no longer wander across the travertines as you please. Everyone needs to go barefoot and stick to the marked paths. Secondly, there’s only a small clutch of pools where swimming is allowed, but you can still get the classic experience of bathing in the open air in balmy H2O, don’t worry about that.

As a UNESCO World Heritage Site, the travertine terraces of Pamukkale are no longer free to enter. There’s a 110 TRY ($13) admission fee for the main site that includes access to the dedicated bathing pools. Despite that, things still get very busy here in the height of the season, so we’d recommend planning a jaunt in May or September when there aren’t so many others around.

Is Pamukkale worth visiting for its history? You bet! Cue Hierapolis. The remains of a vast Roman spa town that sits right at the top of the travertine terraces, this is sure to be the single most incredible part of a visit here for culture buffs.

You can come and wander the original lanes of the ancient resort, between old shops, a forum, and grand triumphal gates, some of which were even built before the coming of the Romans, during the Hellenistic period. It’s remarkably well preserved, and easy to see the old urban plan laid out on the ridges above the white-glowing spa pools.

There are some highlights of Hierapolis itself. You simply cannot miss the colossal Roman amphitheater of Hierapolis. It was built sometime during the reign of Emperor Hadrian and is a breathtaking mass of terraced seats carved straight into the mountainside. Then there are the tombs, which include the supposed tomb of Philip the Apostle, no less!

Hot springs are the reason people have been flocking to this corner of Turkey since time immemorial. A spa town was first founded here in the Hellenistic period, sometime in the 2nd century BC. From then on, the popularity of Pamukkale grew and grew, first making it a major center of natural healing and then a full-blown Roman spa resort.

So, a trip to Pamukkale probably wouldn’t be complete without following in the footsteps of the ancients and taking dip, right? Right. Despite the closure of the main bathing pools on the travertines, there are still some areas where you can do just that. They’re now fed manually by water that’s pumped onto the cliffs, but the experience is the same as it was before, with the dusty hills of Denizli rolling out on all sides.

However, there are some more intriguing options when it comes to hot springs in Pamukkale. Take the so-called Antique Pool, where you can dive into bath-warm H2O in a flooded Roman ruin, complete with submerged columns and mosaics. There’s an extra fee of 32 TRY ($3.80) for it, but that’s cheap for an experience you’ll never forget!

If you thought that Hierapolis in Pamukkale itself was old, just wait until you hear about Aphrodisias! This town leaves most others in the region in the dust when it comes to age. Yep, its origins are now thought to go all the way back to the Bronze Age, meaning it’s a whopping 6,000 years and counting right about now. Wowee!

It will take just over an hour to drive from Pamukkale to Aphrodisias but the journey is pretty spectacular, skirting a range of snow-capped mountains. When you do arrive, try to resist the temptation to delve into the archaeology site right away. The Aphrodisias Museum offers excellent context, showcasing finds from the Hittite civilization that dominated Turkey before 1,750 BC.

Then it’s onto the main attraction: the Aphrodisias ancient site. You can either enter from the west or the east, flanked by two large necropolises filled with tombs that revealed great treasures and tools of all shapes and sizes when they were opened. The main street cuts through the ruins here, linking up the most important points of interest. They include the Temple of Aphrodite from the first century BC and the massive stadium, which is one of the largest ancient stadia in the world outside of Italy.

It’s no secret that most people will head over to Cappadocia to check this particular line from their bucket list. It’s true, there’s really nothing quite like seeing the famous fairy chimneys of that incredible region from high above. However, a bird’s eye view of Pamukkale is also sure to take the breath away, don’t you think?

Today, some folks opt to float high above the rugged ridges of the Denizli Province mountains in a hot air balloon after exploring the ancient ruins and water-soaked travertines of Pamukkale. Doing that means getting a perspective of the wonders that very few others will see, from a whopping 3,000 feet up, as the chalk-colored cliffs and snow-capped Turkish mountains open up on the horizon.

Hot air balloon rides in Pamukkale typically take place in the very early morning. That’s not only to ensure riders get the clearest views and the best light for taking photos, but also because it’s when climactic conditions tend to be most favorable. Expect to pay around 1,400-1,600 TRY ($165-190) for a group balloon flight in Pamukkale, and more like 30,000 TRY ($3,600) for a private flight.

Is Pamukkale worth visiting for anything other than the hot spring and the history? For sure. The town isn’t just about peering back into the age of the Romans and getting your fix of healing mineral waters, you know. It’s also sat in a particularly stunning part of south-western Turkey, where mountain peaks soar above the clouds, there are remote valleys threaded with pine woods, and long-lost villages at the start of challenging hiking trails.

If all that sounds more like your sort of thing than resting in a spa bath for a few days, be sure to mark the Honaz National Park on the map. It lies just to the south and east of Pamukkale, around 35 minutes’ drive from most hotels.

What awaits is a reserve that hugs the highest mountain in the region: The eponymous Mount Honaz at 2,571 meters above sea level. There’s often snow capping the top, but the lower levels of the reserve have oodles of hiking through wildflower meadows in the spring, and even beautiful alpine lakes for picnickers.

It’s virtually impossible to visit Pamukkale without at least whizzing through Denizli on the bus. Welcome to the region’s capital, a large and boisterous city that’s also one of the main transport interchanges for inland western Turkey. Sadly, a couple of heavy earthquakes have ravaged the center in the last few centuries, so it’s now all modern-looking and void of most historical architecture. But there’s other stuff to do…

Check out the Denizli Teleferik. That high-flying cable car can whisk you off ground level to a high-perched lookout point on the peaks above the city. Or there’s the family fun Cavusoglu Aquapark, complete with corkscrewing rides and slides for all ages.

We’d also recommend taking some time to simply wander and enjoy the downtown core of Denizli. There might be very few points of cultural interest, but it’s a rare glimpse at lived-in, raw Turkish life, with bustling cafes filled with domino players and bars plumed in shisha smoke.

So, is Pamukkale worth visiting?

Is Pamukkale worth visiting? Of course it is! The town is unquestionably one of the bucket-list locations in Turkey. It’s famed for its ancient springs and ruins and is probably the only place in the world where you can swim in bath-warm waters in an old Roman structure (niche, eh?). On top of that, there’s also epic hiking on the slopes of Honaz and loads of surrounding history to get stuck into. You’ll love it!

It’s worth knowing that Pamukkale does get very busy in the middle of the main Turkish tourist season. Busloads of people flock in from the resorts on the coast – Bodrum, Antalya, Marmaris – to check off the main sights between May and August. That’s why we usually say the best time to come is during a shoulder season month like September or March. Winter visits are also good but expect it to be both snowy and cold! 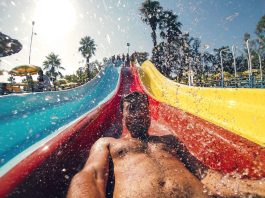