Home Europe 9 Things to Avoid in Amsterdam When Traveling 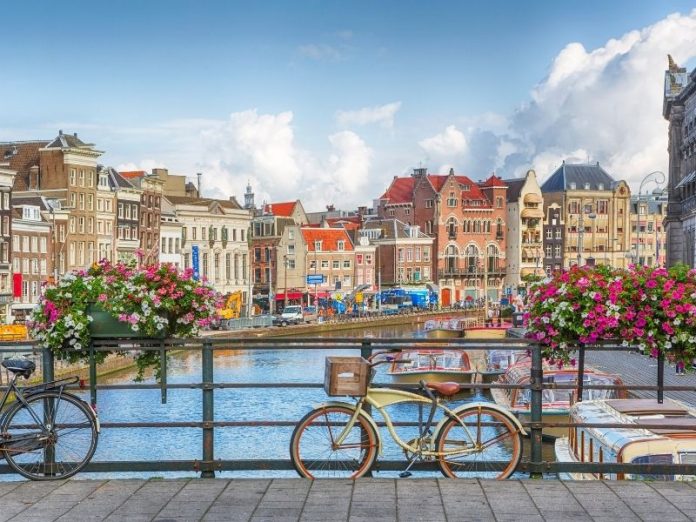 The time has come to discover the hype of Amsterdam – from the renowned coffeehouses to the charming streets lining the endless canals. Filled with a seemingly unlimited number of museums, tours, restaurants, bars, and quirky neighborhoods, Amsterdam truly has something for everyone. Even so, every visitor should be aware of a few things to avoid in Amsterdam.

Some things on this list are obvious, like not buying drugs from strangers and walking in bike lanes. Others, like skipping out on the Heineken beer tour and avoiding renting a car, may come as a surprise.

If you’re planning a trip to the Netherlands, be sure to take notes. Cross off these nine things to avoid in Amsterdam, and you’ll be well on your way to experiencing the best of the best in Amsterdam.

There’s no denying it, Amsterdam is famous for its nightlife and coffeeshops, and we’re not talking about the cozy cafes where you can sip tasty coffee varieties and snack on delicious pastries. We’re talking about the coffeeshops that sell marijuana, cannabis, and other ‘soft drugs.’ Although, what many tourists don’t realize is that a set of rules, both written and unwritten, also exist when it comes to coffeehouses – and breaking these rules can cause both awkward and dangerous situations.

Above all else, it’s essential to follow the advice of staff in the coffeeshops. Whether you’re a first-time smoker or a seasoned expert, the staff will know which product to point you towards and how much to consume. Once you’ve picked out what you’d like, be sure to smoke in the shop and never out in public or prohibited areas. Remember, just because you can purchase marijuana in Amsterdam doesn’t mean it’s entirely legal, and you can still get a ticket for not following the laws.

Another of our things to avoid in Amsterdam is visiting the Instagram famous coffeeshops. These coffeehouses tend to have more expensive and crappier products and feel like a place for people to take pictures rather than enjoy the speakeasy-like culture. Instead, ask your hotel, Airbnb, or friends for local recommendations, which will typically be found well away from other big tourist sites.

The infamous moon cakes. They may sound fun, but these potent marijuana-filled desserts will leave you flying so high that you might as well call it a day. Even if you know exactly what you’re getting into, many tourists are surprised to find just how potent moon cakes are. Plus, as they can take one or two hours to kick in, you’ll find yourself too high in a place you’d much prefer to be sober. To be safe and make the most of your time in Amsterdam, it’s best to avoid edibles altogether.

Along the same lines, it’s essential to avoid buying any type of drugs outside of coffeeshops. Without regulation in place, it’s impossible to know what you’re actually buying. Street dealers have been known to sell anything from parsley to more dangerous and even deadly substances. It’s not only illegal to buy drugs off the street, but in recent years there have been numerous tourists who have died from drug poisoning. So, to be on the safe side, it’s best to put non-coffeeshop drugs straight onto your list of things to avoid in Amsterdam and you’ll find it’s a very safe European city.

3) The bike path, if you’re not a confident biker

Besides the non-coffee selling coffeeshops, Amsterdam is famous for its cycling culture. Everywhere you look, cyclists are zooming by, somehow whizzing in and out of controlled chaos. And if you don’t understand the rules of this chaos, you’ll find yourself frustrating the locals and could even be hit by unsuspecting riders. A few key things to keep in mind if you’re considering hopping on a bike in Amsterdam include:

If you’re a confident cyclist and follow these rules, you’ll love the quick pace and excitement of cycling through Amsterdam and other Netherland cities. On the other hand, if these rules make you nervous, it’s best to add cycling to your list of things to avoid in Amsterdam, stick to your own two feet and find a biking tour away from the city.

Otherwise known as the red-light district, De Walden is a must-do for most people visiting Amsterdam. With its quirky atmosphere and medieval architecture, even if you have absolutely no interest in participating in the rather unique services, it’s fun to wander around and discover this wild place. However, there’s one thing to imprint in your mind before stepping foot in the red-light district, and that’s to keep your phone safely inside your pocket or purse.

It’s considered extremely rude to take pictures of window brothels and sex workers, and if you’re caught, there’s no doubt you’ll be chased down and told to delete the picture. If you’re seen taking pictures mid-action, and even if you’re taking a picture of something completely unrelated, be prepared for your phone to be knocked right out of your hand. Remember, sex work is legal and an accepted part of Amsterdam, and the workers deserve respect.

Another thing to keep in mind in De Walden is to keep watch of your whereabouts. Along with the brothels, De Walden is known as a place where drug dealers hang around. Given the opportunity, they’ll try to sell you illegal drugs and they’re pros at pickpocketing and mugging should you stray down the wrong alley.

5) Going in without a plan

Unless you plan on spending a few weeks in Amsterdam, going in without a plan can mean missing must-dos and spending more time in line than exploring. Amsterdam is a big sprawling city with an abundance of bucket-list things to do and lesser-known neighborhoods to explore. While you don’t want to go in with every minute of every day planned and miss the opportunity for spontaneous adventures, it is good to have a think about your must-dos and accept the fact you may not get to do them all.

Many museums and tours can be booked online, and for a small extra fee, you can purchase a skip the queue ticket. The Anne Frank House is a prime example of a place you’ll want to buy your ticket in advance or risk spending hours waiting to get in or missing out altogether. It’s also a good idea to read up on public transport before arriving in the city to get your bearings and avoid going back and forth across the city all day.

6) Getting stuck in only touristy places

One of the biggest debates about visiting Amsterdam is purchasing the I amsterdam City Card. Yes, it gets you into numerous museums and will save you money if you plan on museum hopping all day, but on the other hand, it’s easy to get focused on checking off as many say you can and miss out on the hidden gems along the way. Amsterdam is packed with small details, cozy cafes, exciting markets, and beautiful parks. Pack a good pair of walking shoes, step outside the central neighborhoods of Damrak and De Walden and allow yourself to lose track of time discovering charming streets.

Along the same lines, if you’re planning on joining a cruise down the canal, we recommend adding big boats to your list of things to avoid in Amsterdam and instead opt for one of the family-run small boats leaving from Oudexijids Voorburgwal. These small boats can navigate the more narrow parts of the canal, and your boat host will tell you amazing stories of the surroundings and give great recommendations on local restaurants and shops. You leave feeling like you’ve discovered the real Amsterdam.

With all our chat about the numerous bike lanes and walking paths, you’ve likely guessed Amsterdam is pedestrian-friendly. The city also has fantastic public transport, with trams, a metro, easy-to-navigate city buses, and even a free ferry – making it extremely easy and cheap to get from one part of the city to the next and even one city to the next. To use public transport, you’ll need to grab an OV card, and you can purchase one in stations, tobacco shops, service desks, and many supermarkets. Or, if you’ve decided to purchase the I amsterdam City Card, you can use this on public transport.

On the other hand, navigating the busy streets by car and finding places to park in Amsterdam can be extremely stressful, costly, and time-consuming. It’s unlikely you’ll save yourself anytime with a rental car when getting around the city, especially as finding an open parking spot that doesn’t cost an arm and a leg is quite the challenge. The only time it makes sense to rent a car is if you’re heading out of the city for a few days to more rural parts of the Netherlands, and even then, only rent the car for the days you’ll be outside of Amsterdam and try to rent one from the outskirts of the city.

8) Assuming it’s not going to rain, no matter the time of year

If you look at the 7-day forecast before your trip to Amsterdam and see only sun, don’t assume this means you can leave the raincoat at home. There’s no beating around the bush here; Amsterdam weather can be rainy. Even in the middle of summer, in June, July, and August, you can expect around 10 days of rain. In the autumn and winter, the amount increases with an average of 12 to 14 days of rain.

It’s not all bad news, though. Just because rain is in the forecast doesn’t mean you’ll be stuck indoors all day. Rainfall usually occurs in short bursts of showers, and within a day, you’ll experience sunshine, followed by showers, followed by more sunshine and showers – hence the need to always be prepared.

It’s also worth keeping in mind that a bit of rain doesn’t stop the city from ticking along. Cyclists will toss on a raincoat, umbrellas will be popped open, and the lively buzz will continue as usual. This is important to know, especially if you’ve booked a tour. Don’t expect delays or cancellations if the weather is acting up. Instead, toss on your rain gear and enjoy whatever mother nature throws your way.

9) Heineken, the beers, and the tour

Last but not least on the list of things to avoid in Amsterdam may come as a surprise. After all, when in Amsterdam, you must drink the famous Heineken, right? We hate to break it to you, but Heineken is the Busch Light of Dutch beer, and the Heineken brewery tour is unfortunately overpriced and impersonal.

We recommend checking out smaller craft breweries to get a real sense of Netherlands beer. Likely the most well-known brewery besides Heineken is Brouwerij ‘t IJ. It may be difficult to pronounce, but its picturesque location underneath the tallest windmill in Amsterdam, along with its tasty brews, is sure to leave a lasting impression. Another unique brewery is De Bekeerde Suster, which gets its name from the Medieval monastery it is located on.

Once you’ve been to a few breweries, you’ll appreciate finding these tasty beers on menus across the city. And we promise you’ll be saving the Heinekens until you’re back home.