Much like the country itself, Icelandic food culture is entirely unique. A remote island, Iceland has had to develop its own special brand of cuisine, free from the influence of other countries. They’ve had to be resourceful with the food they have access to and, of course, make good use of the surrounding ocean.

You may be tempted to compare Icelandic cuisine to British food culture since both are European islands. However, Iceland is in a very different situation. The climate is much more extreme, it’s a long way from other countries, it doesn’t have a colonial past, and people mostly live on the coast.

This means that even if you know a lot about British or Scandinavian food styles, you still have a lot to learn about Iceland. Below, you’ll find our nine favorite Icelandic dishes, giving you an insight into this weird and wonderful food culture.

One of the most unique aspects of Icelandic food culture has to be the hákarl, known in English as fermented shark. One of the country’s most famous (or infamous) national dishes, it’s not something that locals eat every day. However, if you’re in the country, then it might be worth sampling. A shark from the surrounding ocean will be hung to dry for five months, starting a fermentation process.

Over time, this builds up to a strong flavor and aroma. With high ammonia content, it makes many first-time consumers gag. However, over time, you can build up an acquired taste for this truly unique Icelandic dish. Hákarl can easily be bought from grocery stores year-round but is particularly popular during the midwinter festivities. Many consider the shark to be one of Iceland’s most dangerous animals but the truth is, we’re more of a threat to them than they are to us.

Wherever you go in Iceland, you’ll come across skyr. This is a nation of dairy lovers and skyr is the perfect example of this. An ancient food, it was introduced to Iceland by the Vikings. It looks and tastes pretty similar to a mild-flavored yogurt that you’ll find anywhere in Europe or North America. Containing plenty of protein and very little fat, this is one of the healthiest foods you can eat.

Icelandic folk love a bit of skyr with their breakfast. It acts as a neutral base to add your favorite flavors. Consider topping a bowl of skyr with goji berries, pumpkin seeds, chia seeds, honey, or any other delicious and healthy substance. Though the rest of the world has similar products, there’s something unique about skyr. It’s ancient yet incredibly good for you. Give it a try when you can.

Outside of seafood, the most commonly consumed animal in Iceland is lamb. This meat is particularly prevalent on special occasions, especially during the festive period. Hangikjöt is the perfect example of this, although the method occasionally uses mutton or horse meat. The word translates into English as “hung meat”, giving you an idea of how it is prepared.

Traditionally, it will be hung from the ceiling of a smoking shed. The smoke infuses it with a deep, charred flavor that Icelanders just can’t get enough of. The smoked meat will usually then be boiled and served up with potatoes in béchamel sauce and green peas. It’s a hearty, satisfying meal to get you through the bitter winter months.

If you’re looking for even more comfort food while staying in cold and dark Iceland during the winter, then look no further than plokkfiskur. This dish mixes together the leftovers of traditional Icelandic meals, creating something warm and comforting. The base of the dish is fish, usually cod, which is mixed in with potatoes and béchamel sauce.

It’s a rich, indulgent meal designed to lift your spirits. It comes out creamy and decadent, making it popular with tourists from all around the world. You’ll easily find it on pub menus and it’s best enjoyed by a roaring log fire. The filling is cooked once on its own, then again in the sauce. The process is a little slow but it leads to a more flavorsome and satisfying meal.

If you don’t like fish, then you might struggle to eat well in Iceland. There are so many varieties that they love to consume, many of which aren’t found in other areas of the world. One example is the Arctic char, which is native to the northern polar regions. Some people like the smaller dwarf variety but Icelanders tend to opt for the giant char. These beautiful fish averages a whopping 40 cm (16 in) in length.

In Icelandic food culture, the arctic char has long played a crucial role. Inuits and Vikings lived off this protein-rich substance and to this day, it remains an important part of the Iceland economy. It’s generally placed skin-side down in a pan of hot oil and cooked for seven minutes until the skin is crispy and the insides are light and flaky.

Most countries have their own version of soup that they just can’t get enough of. For Icelanders, the national soup is known as Kjötsúpa. Like many other local dishes, it’s based primarily on lamb. Also like other parts of Icelandic food culture, it’s designed to warm your insides and bring you comfort and happiness throughout the winter.

The dish is relatively simple to make if you want to give it a try. Take the braising cuts of lamb and put them in some boiling water with the bones still in. This creates its own stock, infusing it with a deep meaty flavor. Add some root vegetables to create a rustic texture and just let those sugars slowly cook out, bringing sweetness to the dish.

Another common variety of soup eaten in Iceland is langoustine soup or lobster soup. This is a creamy and indulgent treat, perfect for those days when you’re feeling under the weather. Lobster is already decadent enough but the Icelandic folk will add butter, heavy cream, and white wine to create a thick, creamy, and delicious dish.

Add in some tomatoes, celery, onion, and garlic, whizz it all up in your food processor, and there you have it – a truly delicious traditional Icelandic soup. If you’ve never tried lobster this way, then give it a go. It helps this relatively expensive food go a long way. You can easily then freeze the soup and then heat it up whenever you’re in the mood.

Anywhere you go in Iceland, you’ll likely come across cod. Like many cold island countries, this readily available fish is a staple of the local diets. While Brits batter it and serve it with chips, Icelanders take a slightly healthier approach by simply pan-frying it or baking it in the oven.

If you love fish, then go to a nice restaurant and order the cod. You can be sure the chef knows how to cook it to perfection and you’ll likely receive some of the best seafood you’ve ever eaten. At the same time, you’ll be supporting the local fishing community that always needs a little help from hungry tourists.

People looking for a taste of home are often drawn to pylsur or the Icelandic hot dog. It looks exactly like the ones you’ll find in the USA and Europe but it comes with a unique twist. The sausages themselves were brought to Iceland by none other than the Germans, who we all know to have some of the best pork in the business. But these sausages aren’t just made from pigs; they contain lamb meat as well.

That’s what gives them a distinctive flavor, setting these hot dogs apart from the ones you might be used to. The dogs are served on a warm steamed bun with a generous topping of onions, fried or raw. It’s a nice change from all the seafood and gives you a chance to taste a unique version of the fast-food you know and love.

What is traditional food in Iceland?

Food in Iceland is typified by huge amounts of seafood, along with dairy products and lamb. Traditional food originates with the Viking settlers in the 9th Century.

What is Iceland’s most popular food?

Fermented shark is Iceland’s most infamous dish but isn’t something that locals tend to enjoy eating. The most popular dish is more likely to be a mild yogurt called skyr or, if you love meat, then hangikjöt (smoked lamb).

What is a traditional breakfast in Iceland?

Icelanders typically start their day with a dairy product called skyr, topping it with seasonal seeds and berries. Chia seeds and goji berries make this one of the world’s healthiest breakfasts.

What makes the food in Iceland unique?

Iceland’s remote island location gives it a unique food history. The country has had to depend on lamb farming and fishing to feed its population, coming up with creative ways to invent new interesting meals.

Is Iceland Expensive? Spending In The Land Of Fire And Ice 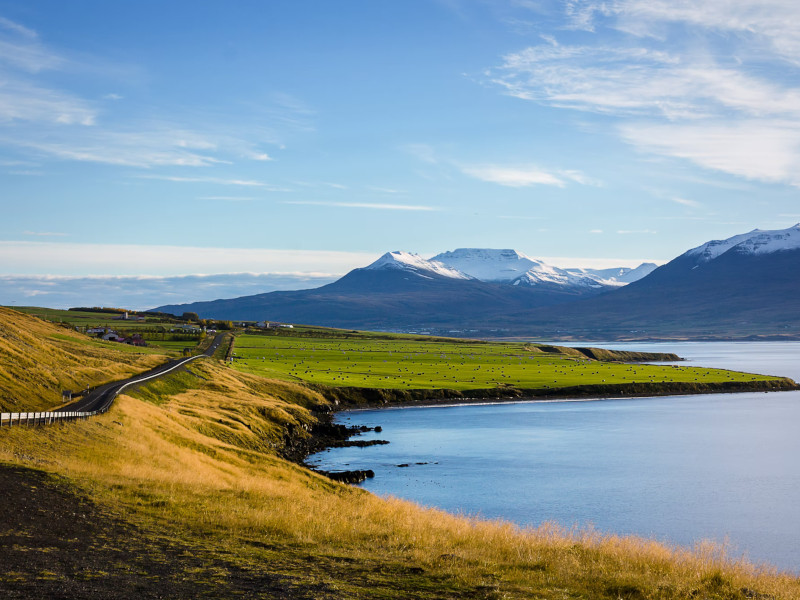 17 Ways to Travel Iceland on a Shoestring Budget