Home Europe Germany The 7 Warmest Places In Germany To Visit

Germany is not known for being one of the warmest or sunniest places in Europe. The temperate climate holds notoriously unpredictable weather. Cold fronts regularly blow in from the north, and the high altitude mountains in the south offer dramatically beautiful scenery but don’t make for the warmest holiday destinations!

However, this temperate climate does mean that Germany is a great country to visit during all the different seasons. It has beautiful springs and autumns, and the winters are so snowily festive that they’ve led to a thriving Christmas market industry. And, during the summer, there are surprising pockets of sunshine and warmth dotted around the country.

Germany is home to cities with balmy summer nights, winery regions with almost Mediterranean landscapes, and even some beach resorts destinations on the north coast. So if you’re looking for the warmest places to visit in Germany, here’s our list of the seven top spots.

Good news for anyone wanting to visit the capital of Germany, Berlin topped the charts in 2021 as the warmest and driest state in the country. It saw one of the highest annual average temperatures coupled with the lowest rainfall. Also, unusually for Berlin, which has a reputation for having rather grey skies, it saw more hours of sunshine than the country’s usual yearly average.

These figures are for the state as a whole. But the city itself often feels even warmer than the rest of the state. As is the case in many urban areas, the density of enclosed spaces, buildings, and roads means that the city retains heat in a way that the open countryside does not. For this reason, the city can feel up to 4℃ warmer than the surrounding state despite experiencing the same climate and weather.

But this mild weather is not the only reason to visit Berlin, far from it. The capital of Germany holds an abundance of attractions for tourists, including excellent museums and many poignant monuments to its turbulent history, including, of course, remnants of the Berlin Wall. And, history aside, visitors will also find a thriving, cosmopolitan city known for its vibrant nightlife, great food, world-famous beer, and packed events calendar.

Although Berlin snagged the title for the warmest state in 2021, it is Frankfurt that is generally considered the warmest city in Germany. With an average yearly temperature of 11.4 ℃, summer temperatures that hit the mid to high 20’s and winters that rarely drop below freezing, Frankfurt is one of the warmest places to visit in Germany year-round.

And, as with Berlin, Frankfurt city retains heat in a way that rural areas do not, which means that the temperatures within the city are higher than the surrounding area. This can lead to the ‘tropical nights’ phenomenon, where the temperature in the summer months does not drop below 20℃ overnight, thanks to residual heat stored by the roads and buildings.

Also, temperatures in Frankfurt have been consistently climbing in recent years. As a result of climate change, the city has been experiencing warmer, drier, sunnier weather with more record-breaking hot days than ever before. While this may seem like good news for holidaymakers who want to enjoy the mild conditions and balmy nights, it is cause for concern amongst environmentalists.

This is definitely the city to visit if you’re planning a winter trip to Germany. The Stammheim district of Cologne was named the warmest place in the country in 2021, thanks to its average temperature of 11.4℃. Plus Cologne is located in the Rhine Ruhr region, which is known for having the warmest winters in Germany. Even during the coldest months of winter, January and February, the temperature remained at an average of 3℃. Practically balmy!

Sadly this warmth and heat don’t also mean sunshine. Cologne is one of the warmest but cloudiest spots in the country, with only 1590 hours of sunshine a year compared to Berlin’s 1700 and Rugen’s 1800.

If you’re looking for a warm place to visit in Germany that also makes for a unique excursion, how about the island of Mainau? Located in Lake Constance and connected to the mainland by a bridge, Mainau is known as The Flower Island, thanks to its abundant floral beauty and constantly blooming gardens.

The island enjoys an average of 8 hours of sunshine a day and a climate so mild that plants more often found in Mediterranean, subtropical, and even tropical locations are found here. As you wander beneath palm trees and through citrus groves, you may begin to wonder if you’re really still in Germany. Even in the winter, when temperatures can dip below freezing, the complex of greenhouses on the island means that something is always in bloom.

While the island is a place to visit rather than a place to stay, the area surrounding Lake Constance offers plenty of options for vacation accommodation. Its beautiful landscape and calm waters afford plenty of watersports, sailing, hiking, and camping opportunities, making it the perfect place for a family getaway.

The Palatinate region, also known as The Pfalz, has one of the warmest climates in Germany, with places that exceed 2000 annual hours of sunshine. In fact, the climate is so mild that this region often draws comparisons with Tuscany in Italy. This comparison is reinforced by the fact that Pfalz is home to many acres of vineyards.

Pfalz is Germany’s second-largest wine region and is a popular destination for wine enthusiasts. Visitors come to drive the twisting roads through the scenic countryside, sample wine made from more than 60 varieties of local grape, and visit the many wine festivals held throughout the region.

If you’re looking for a warm place to base yourself in the Pfalz region, try Frankenthal, where the average annual temperature is over a degree higher than the region as a whole, coming in at 11.3℃.

On the border of the Pfalz region, you’ll find Karlsruhe, a city known for its rich history, fan-shaped layout, and its warm and mild climate. Karlsruhe enjoys a sunny, temperate year-round climate similar to the adjoining Pfalz region and has some of the mildest winters of any city in Germany. Even in January and February, the city’s coldest months, the temperature rarely drops below 0℃ and averages around 0.7℃.

The city celebrates its mild climate with its profusion of parks and public gardens. Over 60% of the city is given over to green space, and there is not one but two botanical gardens.

But the greenery is not the only reason to visit this southwestern city. It has also been named as one of UNESCO’s creative cities. An initiative that celebrates and promotes co-operation between cities with a strong creative ethos. Karlsruhe was awarded City of Media Arts and has an events calendar packed with festivals and exhibitions showcasing its talents.

We couldn’t talk about the warmest places in Germany without including at least one beach destination. So if you fancy the german seaside, consider visiting Rugen, Germany’s largest island and one of its premier summer beach resort locations. Rugen offers a pleasant climate with peak summer temperatures averaging in the low to mid 20’s. While it might not technically be one of Germany’s warmest places, since the average yearly temperature is only around 9℃, it is one of the sunniest. With over 1800 hours of sunshine a year, Rugen has long been a favorite destination for sun worshippers.

Once an exclusive retreat for Germany’s wealthy elite, Rugen now has a much more widespread appeal. Thousands of domestic and international holidaymakers head there each year, drawn by both the sunshine and the beautiful landscape. Rugen is an unusually shaped landmass characterized by baltic sand beaches, enclosed bays, lagoons, and the dramatic chalk cliffs of the Jasmund peninsula which have been awarded Unesco world heritage status.

Where is the warmest city in Germany?

Frankfurt is generally considered the warmest city in Germany with an average yearly temperature of 11.4℃, mild winters, and a sunny, fairly dry year-round climate.

Does it snow in Germany?

Yes, snow in Germany is a fairly common occurrence. However, unusually for a northern hemisphere country, Germany’s winters get colder and snowier the further south you head. This is because of the rising altitude of the country as you reach the mountainous region of the south. In comparison, the north experiences milder but wetter winters thanks to its proximity to the coast.

What state in Germany has the best weather?

Berlin won the title of Germany’s warmest and driest state for 2021 with the highest average temperature coupled with the lowest annual rainfall.

What are the warmest months in Germany?

June, July, and August are the warmest months in Germany. The country enjoys the standard northern hemisphere calendar with four distinct seasons. Thanks to the country’s temperate climate, the seasons change dramatically so visiting at different times of the year can offer a wide variety in the landscapes and scenery. 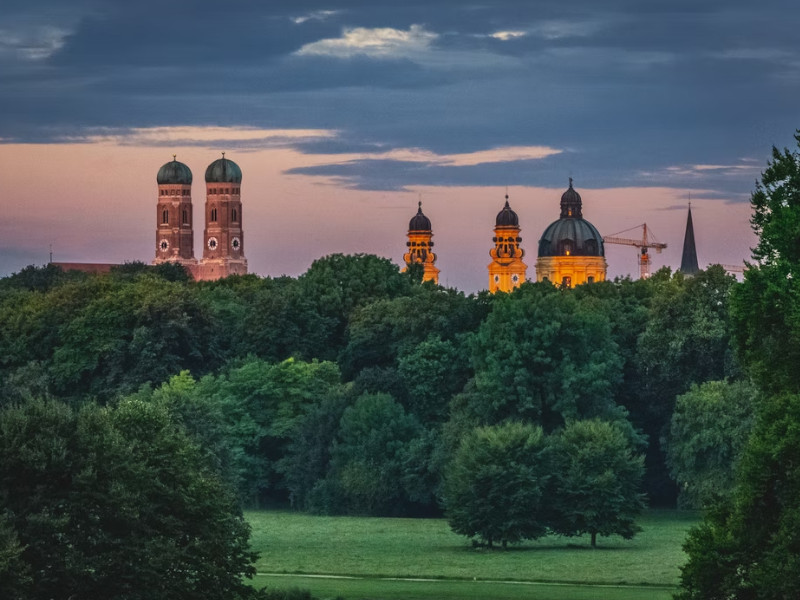