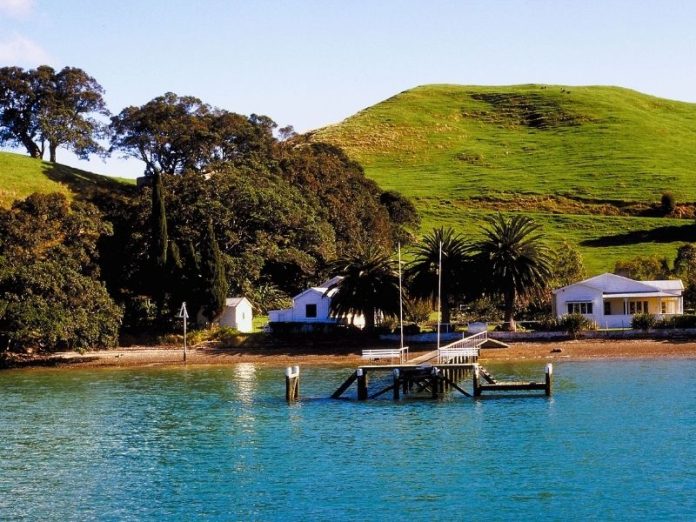 New Zealand has a reputation for being expensive. Everything from fuel to the price of avocados is shocking to new arrivals, and with the average cost of a house in New Zealand now exceeding over NZ$1,000,000 (US$685,000), finding New Zealand’s cheapest places to live may sound like a fairy tale.

However, if you dig a bit deeper, you’ll find not all of New Zealand is expensive. There are plenty of off-the-beaten-track towns that offer the breathtaking landscapes that New Zealand is known for and are cheap and great places to live.

If you’re looking to settle down in the land of the Lord of the Rings or just want an extended stay, we’ve rounded up the top seven New Zealand cheapest places to live so you can use those extra dollars to enjoy the country’s good food and even better landscapes.

Topping the list for cheapest places to live in New Zealand is the geothermal and cultural hot spot of Rotorua. Located roughly in the middle of the North Island, it’s close enough to the bigger cities of Auckland and Hamilton that you’re never far from necessities yet can enjoy the quiet and slow pace of rural New Zealand. Without a doubt, Rotorua is one of those places that no matter what you’re doing, you’ll know you’re in New Zealand.

Besides holding the title for New Zealand’s cheapest places to live, Rotorua is also well-known in both the domestic and international tourist world. The town lies on the Rotorua Caldera, meaning it’s home to geysers, mud pools, and hot springs. Many fascinating hikes dot the region and strolling through town dodging the mud pools is always entertaining. Just be sure to prepare yourself for the always-present rotten egg smell that comes with the town.

When it comes to living in Rotorua, expect to pay between $750 (all prices in USD) for a one-bedroom apartment and $1,200 for a three-bedroom apartment. The average house price is around $420,000 which is well below the average for New Zealand. On the other hand, the cost of food is similar to other towns in New Zealand. Expect to pay around $100 per person for basic food necessities, and if you’re eating out at a casual cafe, you’ll be paying around $15 for a meal and a coffee.

Located a four-hour drive southwest of Rotorua is the second of New Zealand’s cheapest places to live, Whanganui. Pronounced fang-ah-new-we, which means ‘big bay’ in Māori, this small city is home to just under 40,000 residents who take advantage of the quieter lifestyle and affordable cost of living found here. Compared to $1,150 per month for a one-bedroom apartment in Auckland, Whanganui’s $750 per month will leave you with plenty of extra money in your pocket to enjoy the surroundings or save up to buy a home.

Like most of New Zealand’s smaller cities, Whanganui has a sleepy vibe. If you’re looking for endless things to do and a buzzing nightlife, you likely find yourself bored after a few days here. However, those who take the time to settle in and don’t mind restaurants closing well before midnight will be rewarded with a city of very little crime, friendly neighbors, and lots of nature to explore.

Whanganui is especially a good place for families looking to live less expensively and still have access to larger cities within a few hours. Palmerston North, a city roughly twice as large, is 2 hours away and Wellington, the capital of New Zealand, is just over 2.5 hours drive. Plus, with both public school and private school to choose from and plenty of jobs to go around, Whanganui is an easy place to settle in stress-free.

Dunedin also tops the chart for both the cheapest places to live in New Zealand and one of the safest places. However, unlike other cities on this list, Dunedin is anything but sleepy. Home to the University of Otago, it’s largely a student town with an abundance of sports teams, events, and festivals to keep everyone entertained. The city of just over 100,000 also has plenty of quirky bars and cafes to meet others or just hang out and watch the world go by.

In terms of living costs, the average price of a studio is $685 per month, and a three-bedroom house tops out at $1,530, so you won’t have a problem finding reasonably priced accommodation. However, as rowdy students dominate some neighborhoods, it’s always recommended to see a place in person before signing a lease. You don’t want to find yourself in the middle of the annual couch burning day held by university students.

Besides its vibrant city center, Dunedin shines through with long stretches of beaches, amazing New Zealand wildlife, and endless hiking opportunities nearby. However, you’ll want plenty of warm clothes when winter arrives and with it chilly winds straight from Antarctica. This coolness drags Dunedin down from being higher on New Zealand’s cheapest places to live. New Zealand is famous for its high electricity costs, and with Dunedin’s lack of housing built for cooler temperatures, many residents are not pleasantly surprised by their first energy bill.

Napier is an ideal place to call home if you love wine, sunshine, a mild climate, and a bit more money in your pocket after paying the bills. Somehow this character-filled small city has stayed off the tourist radar, which means Napier still retains its authentic Kiwi charm and housing prices have risen slower compared to the more well-known regions of New Zealand. A one-bedroom apartment with sea views will cost a mere $685 per month, and even if you’d like a larger 3-bedroom house with a yard and lovely views, you’ll only be set back around $1,575 per month.

Napier is part of the larger Hawkes Bay region which also includes Hastings and Havelock North. The city limits of Napier itself stretch far beyond the main stretch of town, so you have the choice to live close to the sea, under picturesque mountains, in a friendly suburb, or right in the small but charming city center. Another reason you’ll find living in Napier less expensive than many other parts of New Zealand is its access to fresh fruit and vegetables. With plenty of farms nearby, you can find cheap produce at farmer’s markets, along with food trucks selling kiwi favorites.

Again, if you’re looking for bustling nightlife, you won’t find it in Napier. If you’re looking for a wonderful place to raise a family or enjoy spending weekends between the sea and the mountains, you’ll love calling this charming city home. Plus, with all the money you’ll be saving, a trip to Auckland or Wellington is definitely on the cards.

Located at the bottom of the South Island with hardly more than 1,400 residents, Riverton is a hidden gem just waiting to be enjoyed. In many ways, its affordable housing, abundant fish and fresh produce, and warm sense of community are reminiscent of what New Zealand was like before tourism took hold. In fact, the only tourists who find their way here are other Kiwis on holiday.

If you’re looking to buy, you can find quality homes with a sea view for under $275,000 – which is half of New Zealand’s average home cost. When you head to the local cafe and bar, you’ll also notice food and drinks are a bit cheaper, and if you know the right people, you may even get to dine on free fresh crayfish, paua, and mussels. That’s not all that’s free. With a river, ocean, and plenty of hiking trails, you can swim with dolphins, surf, and spend a few hours hiking all before dinner.

On the other hand, if you’re not much into the outdoors and prefer late-night bars over sunrise fishing, Riverton may not be the place for you. When it’s raining or cold winds sweep across town, there’s not much to do besides post up at the local cafe and enjoy the company of other locals and the odd passerby.

With pristine coastlines, endless sunshine, and friendly neighbors, Whakatane (pronounced fack-ah-ta-knee) is one of those places you visit and never leave. In fact, Whakatane is ranked the sunniest place in New Zealand and has one of the country’s highest quality of life rankings. So how does this fairy tale town make it on this list? Your guess is as good as ours.

Everything from gym memberships to housing prices in Whakatane are well below New Zealand’s average. A one-bedroom apartment will cost you around $750 per month, and a three-bedroom right in the city center or along one of the incredible beaches will cost around $1,400. Not only that, with abundant fishing and a perfect climate for a home garden, if you put in a bit of old-fashioned hard work, you’ll cut your grocery bill way down.

The catch? If you’re not into the outdoors or enjoy your rowdy night-outs, Whakatane is a hard sell. As the town of just under 17,000 has become attractive to families and retirees, its focus has been to provide excellent health care and a good community feel. Meaning nightlife, festivals, and big-city delights are a good few hours drive away.

Compared to these other New Zealand cheapest places to live, Christchurch may not seem like that great a bargain. However, Christchurch finds its way onto this list as it’s the cheapest of the three largest cities in New Zealand – the others being Auckland and Wellington. With its mild climate, affordability, good education, and career opportunities, it’s an ideal place for those looking to enjoy big-city conveniences without the price tag.

In recent years and with high housing prices driving people out of Auckland and other expensive regions of New Zealand, Christchurch has seen a boom in its population. In turn, accommodations are becoming harder to find, yet the rental price is yet to reflect this. One-bedroom apartments range between $685 and $920 and three-bedroom apartments hover around $1,370 per month. Other costs of living are similar and, in some cases slightly lower to what you’d find across New Zealand, and its booming population means a lot of options for food and entertainment.

If you’re planning on moving to Christchurch, it’s essential to know that it’s located on the South Island’s east coast and is set on the Pacific Ring of Fire. Small earthquakes are a common occurrence, and as Christchurch has major and destructive earthquakes dotting its history, you’ll want to make sure you’re prepared for a bit of shaking. Scars of the February 2011 earthquake can still be seen, reminding residents of the power just below their feet.

What is the most affordable place to live in New Zealand?

The most affordable place to live in New Zealand is Rotorua. Between the city’s cheap rent, great job opportunities, and enough nature around to keep you entertained for a lifetime, there’s no doubt you’ll find your dollar stretches a bit further here. Just be prepared for a quieter lifestyle and its rather unfriendly smell due to the abundance of geothermal activity right in the heart of the city.

Can you live cheaply in New Zealand?

It’s very possible to live cheaply in New Zealand if you know some great money-saving tips and avoid touristy regions. Avoid places like Queenstown and Auckland, be open to renting a room in a share house or living further away from the city center, opt for public transport when possible, and most importantly, cook your own meals rather than going out.

What is the cheapest rent in New Zealand?

If you’re looking for the cheapest rent in New Zealand, your best option is to look for an available room in a share house. Depending on which town or city you’ll be living in and how many others live in the house, it’s possible to pay as little as $275 per month in rent. However, if you’d like your own one-bedroom apartment, expect to pay a minimum of $685 per month.

One Week in Queenstown Itinerary: Your Local’s Guide

Things to Avoid in New Zealand: 9 Big Do Nots