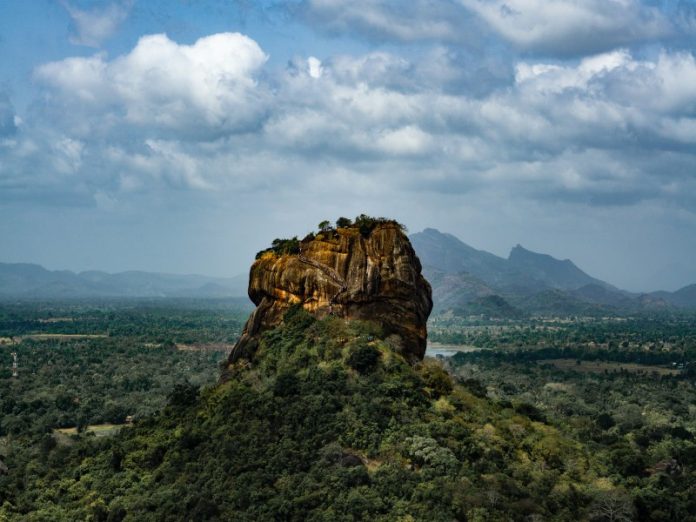 Welcome to our guide to learning Sinhala, basic phrases for traveling Sri Lanka. This one’s all about getting to grips with the lingo of the Teardrop of India, a land of paradise beaches and monkey-swinging forests, of tea-clad highlands and surf breaks so perfect you’ll be waxing down the board in no time at all.

As with anywhere on the planet, we always think it’s a good idea to get a few useful words and sentences under your belt before you arrive. Not only should it make haggling for that tuk-tuk a little easier, but it should also garner you some serious Brownie points with the locals, who aren’t at all used to tourists even trying their hand at the speak.

Here, we’ll run through a few essentials of the language before outlining a bunch of Sinhala basic phrases that we think should help you with all sorts, from saying thank you to navigating from the sands of Hikkaduwa to the misty mountains of the Horton Plains and back again. Api yamu! Let’s go!

What is Sinhala, exactly?

Sinhala is the language that’s spoken by the majority of people in Sri Lanka. It’s the official language of the ethnic Sinhalese, which are the largest ethnic group on the island, closely followed by Sri Lankan Tamils and then Sri Lankan Moors, who each have their own distinct tongues.

Today, an estimated 87% of the country speaks Sinhala. Meanwhile, just over 28% speak Tamil and a little more than 23% speak English, although you’re likely to notice that most people in the most-visited parts of the island have at least some ability in English on top of their first language.

More generally, Sinhala is an Indo-Aryan language that came to the island nation sometime around the 3rd century BC along with the arrival of Buddhism. Its origins are thought to have been in Northern India, although the Sinahla writing system and alphabet (more on that below) displays considerable influences from the Brahmi scripts of southern India, too.

Technically speaking, Sinhalese isn’t an alphabet at all. Instead, it’s an abugida, a writing system that couples together both consonants and vowel sounds. That means that the letters you put down on the page will change depending on what word you want to write. For example: ක on its own makes a ‘ka’ sound. But, add a dash across the top of the letter to create කි (see the little squiggle above?) and you turn the sound into a ‘ki’.

In all, the Sinhalese abugida contains 20 consonants, of which two have no discerning sound in the modern version of the language. Those consonants can couple with any of 12 so-called diacritic vowels (vowels that match with consonants). And then there are the independent vowels, which are vowels that don’t need any partnering consonant to influence how you say something.

Sound confusing? Yep – us too! Don’t worry, you don’t actually need to be able to read the words on the page to get some Sinhala basic phrases under your belt…

Sinhala basic phrases for greeting people, getting to know people, and saying goodbye

First thing’s first, eh? You’ve just whizzed into Colombo airport and you’re through passport control. There’s a driver there waiting to whisk you south to the glinting beaches of Bentota. They have a big, ear-to-ear smile on their face as you trot out of the terminal (a trademark of Sri Lanka, by the way)…what do you say? Check out the Sinhala phrases below…

Sinhala basic phrases for getting around

Want to go from Dikwella Beach to the mist-haloed mountains of Ella? Looking to hop on the iconic train from Kandy to the tea country? Want to visit the east coast and looking for a ride to Arugam Bay? Here are a select few phrases that should help with getting around the Teardrop of India…

If you’re planning a backpacking adventure in the Teardrop of India or want to relocate there as a digital nomad, the phrases below are ones that you might want to master before you board that flight across to Colombo…

Sinhala basic phrases for day-to-day use

There are some things that you simply can’t survive without: A please, a thank you, a yes, a no. Here, we’ll take a look at some of the must-know sentences and words that no traveler to stunning Sri Lanka should leave themselves without:

We’re not going to beat around the bush: The eating is one of the main reasons that we’re such huge fans of Sri Lanka. Coconut-creamed dals, spicy rotis, egg hoppers before an early-morning surf, the tangy brinjal, the sweet banana pancakes…it’s a dream. Here are Sinhalese phrases that are all about the dining.

Here’s how to count up to 10 and beyond. You know, for when you want to order a stack of egg hoppers or a whole bunch of veggie rotis before or after a long hike in the Horton Plains National Park. Here we go…

This guide to the most basic phrases in Sinhalese is just scratching the surface of this ancient and wonderful language. It’s got some hints on how to ask for directions (and understand them once they are given), how to greet and bid farewell to the folks you meet on your travels, and – most importantly of all for us – how to go about ordering food and making sense of the menu.

Remember that, while an estimated 80%+ of the people in Sri Lanka speak Sinhalese, there’s also a considerable Tamil minority. They have their own language, which you’re most likely to encounter if you’re traveling to the north and east sides of the island, to the stepped Hindu temples of Jaffna or the blinding white beaches of Trincomalee. Getting to grips with that lingo will involve getting to grips with a whole other array of important phrases!

What language do they speak in Sri Lanka?

Is Sinhalese difficult to learn?

Sinhala, the national language of Sri Lanka, is considered a tricky language to learn for native English speakers. That’s mainly because you have to get to grips with a whole new alphabet, and it’s not at all like English because it makes use of conjoined consonant and vowel sounds in the very same letter.

Do they speak English in Sri Lanka?

An estimated 23% of Sri Lankans speak English as their first language. However, you’re likely to be able to get by quite well using only English, as most Sinhala people have a good grasp of it, as do many of the Tamils in the north and the east of the country. That’s especially true in the much-trodden southwest coastal towns and the highland hiking town of Ella, where lots of tourists go to visit.

Our List Of Dos And Don’ts In Sri Lanka For First-Time...

The 7 Best Beach Towns In Sri Lanka For Sand And...