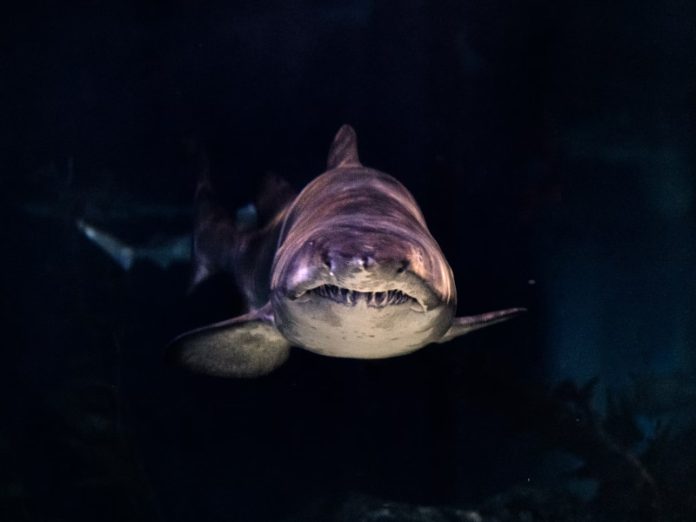 Are there sharks in Hawaii? Of course there are! Most people don’t even need to ask this question since the US’s 50th state has some of the worst records for shark attacks in the world. There are around 40 species of these marine creatures lurking beneath the surface of Hawaiian waters, but luckily, not all of them are dangerous…

With miles of coastline on the roaring Pacific Ocean, lush green jungles with gurgling waterfalls, and wild volcanoes inland, it’s easy to see why so many people associate Hawaii with paradise on Earth. It’s also home to colorful coral reefs and fantastic surf breaks, so it’s no surprise that it’s a popular destination for surfers, swimmers, and divers. While thousands of people hit the water in Hawaii every day without ever spotting a shark, biting incidents are not unheard of.

This guide will answer the question “are there sharks in Hawaii?” by giving you an in-depth guide to nine key species you may find in the Aloha State. You will learn about the most dangerous and the most common sharks that swim in Hawaiian waters.

Are there sharks in Hawaii that you should fear? The short answer to this question is yes. Tiger sharks are the most dangerous ones out there. They have been responsible for the most shark attacks in Hawaiian waters over the years, but luckily, most victims have survived. It was the tiger shark that famously attacked a young surfer in 2003, Bethany Hamilton, who lost her arm while surfing around Kaua’i.

These are big sharks, the second largest predatory species after great whites. They can grow up to 16 feet but rarely exceed 13 feet in length. They typically weigh between 386 and 1,400 pounds. The thing to look out for to distinguish a tiger shark from others is the shape of its head. It’s quite wide and flat with a short but broad snout and a large mouth. Their nostrils are relatively far apart, pretty much on par with their eyes. You can also recognize them by their skin color, which ranges from blue to light green, with a white or slightly yellowish belly. Younger individuals have characteristic stripes on their backs, hence the name, though those usually fade as they age.

Despite the fact that tiger sharks pose the most threat to people swimming in Hawaiian waters, their bite rate is low. The main reason they’re dangerous is that they often visit shallow waters around reefs and canals and are commonly found at river estuaries. That means you’re more likely to encounter them than many other species which prefer the deep ocean. Still, loads of people swim and surf around pristine Hawaiian beaches without ever spotting these marine beasts, but you should stay vigilant.

The most recent confirmed attack by a tiger shark in Hawaii happened in May 2021 around Maui. There were four reported incidents that year but none of the victims died. Sadly, there was one confirmed fatal incident in December 2020 in Honolua Bay, around 20 feet from the shore. The victim was a surfer.

Another scary beast that lives in Hawaiian waters is the infamous great white shark, which was portrayed in the popular Hollywood horror, Jaws. Its fearsome reputation is well deserved – this shark is responsible for the highest number of attacks on people worldwide. Luckily, sightings of great whites in Hawaii are extremally rare, so they’re not the biggest threat to the surfers and swimmers.

You can recognize great whites by their colors. Their dark grey backs drastically change into white underneath rather than blend, as is the case with the majority of sharks. When it comes to their shape, they’re quite bulky with a characteristic pointed snout and a triangular dorsal fin. Females are larger than males. They can grow up to 20ft in length and weigh a whopping 5,000lbs. That said, most individuals are much smaller, between 11 and 15ft long, and around 1,600lbs in weight.

The most recent incident that involved a great white in Hawaii was off Banyans in Kailua-Kona in December 2021. A surfer, Jared Willeford, suffered lacerations to his left forearm, an injury that wasn’t life-threatening. There was also viral footage of a 15-foot great white swimming toward a diver off Kona on the Big Island in November 2021.

Another dangerous shark you might spot in Hawaii is the Galapagos shark. That said, they are nowhere near as aggressive as tiger sharks or great whites, so getting attacked by one is extremally unlikely. There have been a couple of biting incidents confirmed to be caused by the Galapagos, but all of them were considered provoked. None of the victims sustained serious injuries, either.

Galapagos sharks usually reach just below 10 feet in length and don’t usually weigh more than 430lbs. They have slender bodies and rounded snouts. It’s quite hard to distinguish these sharks from grey reef sharks and dusky sharks because of their spindle-shaped bodies, but you can tell them apart by looking at their dorsal fin, which is tall and rounded at the tip.

Blacktip sharks are amongst the most common sharks that live in the ocean around the Hawaiian Islands. They like warm, shallow waters, close to the coast and beaches, and often dwell near river mouths. That means spotting a blacktip while swimming is relatively likely. There is no need to panic, though, they’re not considered to be very dangerous to humans.

Blacktips show some interest in people they encounter but tend to stay at a distance because of their timid nature. That said, because of their size and agility, they are capable of harming people, and they might become aggressive if they spot some food, so we don’t recommend getting too close to these marine creatures.

They can grow up to 8 feet long and don’t usually weigh more than 270lbs. They have pointed snouts and small eyes. Their jaws are lined with 15 spiny teeth on each side. Blacktips are grey, but you can recognize them by the white stripe that’s visible on both sides and the black tips that dash across most of their fins.

Hammerhead sharks are by far the most unique looking fish in their family, and you can easily recognize them by the shape of their heads. Yes, they look a bit like hammers! You can distinguish scalloped hammerheads from other hammerheads by an indentation that is visible in the center of their wide heads.

They usually measure between five to eight feet and typically weigh between 64 to 180lbs. Their laterally elongated heads are not just a decorative feature. They help them detect and capture prey. Due to their size and sharp teeth, they can potentially be dangerous to people, but these are not aggressive creatures. They usually swim away if they get approached.

In Hawaii, the adults usually live offshore in the deep ocean, but they do come close to the coastline to have pups. They have been spotted in Hilo Bay, Kane’ohe Bay, and Waimea Bay amongst other locations.

If you’re asking are there sharks in Hawaii that you don’t need to be scared of, then the answer is yes to that too! One of those species is the whitetip reef shark. It’s also among the most common sharks in the area, although their numbers have been decreasing due to overfishing in recent decades.

They are relatively small sharks and don’t usually exceed 5 feet in length. They have slim bodies and wide heads with a rounded snout. Like most sharks, they’re grey on top and whitish underneath, but you can recognize them by the bright white tips on some of their fins.

Whitetips usually spend their days resting in caves and lava tubes off the Hawaiian coast. They’re more active at night when they hunt for smaller marine creatures that include eels, octopi, and small, bony fish.

Grey reef sharks – just as the name implies – live in the reefs around the more remote northwestern Hawaiian Islands. They also like rugged terrain and strong currents rather than soft, sandy sea bottoms, which means you’re most likely to encounter these sharks if you’re scuba diving.

They don’t usually grow much beyond six feet when they reach adulthood, but there have been cases of larger individuals that were eight feet long. They’re typically grey with a white coloring underneath but can sometimes appear bronze. Their diet mainly comprises smaller bony fish, as well as squid, octopi, and lobsters.

These sharks are quite curious when approached by people, but rarely aggressive. There has only been a handful of biting incidents that involved these reef swimmers worldwide, but none of them happened in Hawaii.

The blacktip reef shark is one of the most common requiem sharks living in the tropical reefs of the Indian and Pacific Oceans. They typically dwell in the shallow corals not far off the shore of smaller Hawaiian Islands and atolls.

They’re relatively small representatives of the shark family and don’t usually grow beyond six feet long in their adulthood. As the name suggests, these species have black tips on all of their fins, but they shouldn’t be confused with their larger cousin, the blacktip shark, which are different species entirely.

These sharks are rather timid and don’t pose much danger to humans. They usually swim away if they encounter people, but there have been a handful of minor biting incidents in other parts of the globe.

The bignose shark is a species of requiem shark that lives in the tropical and subtropical waters across the world, including the Pacific Ocean around Hawaii. They prefer deep ocean and rarely come to the shore, so you’re unlikely to see one if you stick close to the coastline. That means they’re not considered to be dangerous, because they hardly ever encounter any people.

These sharks are quite big and could be intimidating if you did happen to see one. They can reach up to 12 feet in length and weigh in at 370lb. That said, it is us that pose more threat to them than they do to us. Bignose sharks have been overfished globally, and their numbers have been declining. However, they aren’t sought after commercially in the US since they have been on a prohibited list since 2007.

Are there sharks in Hawaii – the conclusion.

Are there sharks in Hawaii? Yes, there are! There are about 40 different species of these most feared marine creatures in the part of the north Pacific that surrounds the Hawaiian Islands. The tiger shark is the one to fear the most since it’s responsible for the most attacks on people in this part of the world. There is also a slim chance of spotting the infamous great white, but luckily there are not many of them around the US’s 50th state. While Hawaii has a pretty bad reputation for shark attacks, most people don’t even catch a glimpse of a triangular fin poking out of the water during their trip. That said, you should always keep up to date with the warning signs if you’re planning to swim, surf, or dive in the land of Aloha.