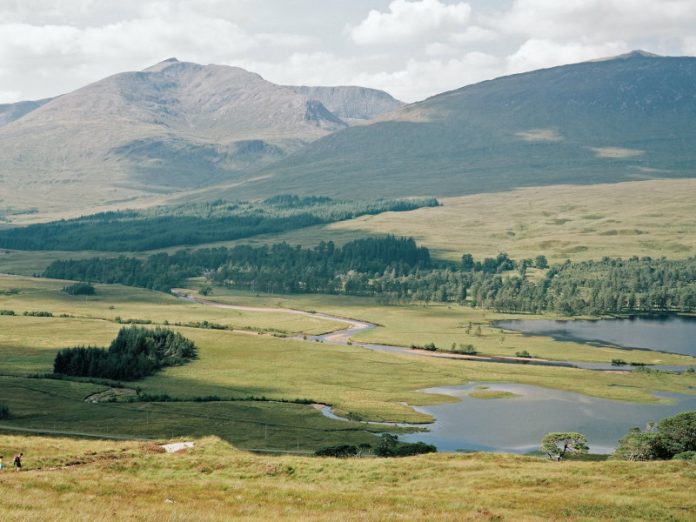 If you’re lucky enough to get a clear day in Scotland’s second city, just look to the horizon and see that there are plenty of mountains close to Glasgow. Driving just about an hour north gets you to the heart of the Southern Highlands, which have all sorts of peaks to conquer, from gentle hills to tall and jagged munros (peaks over 3,000 feet).

All 10 highest peaks in the UK are within Scotland’s borders, and a quick glance at the map will reveal that there’s no shortage of mountain ranges on the doorstep of the big cities. In fact, Glasgow is widely considered to be one of the best jump-off points for hikers and ramblers of anywhere in the country.

This guide will talk you through seven mountains close to Glasgow that you can easily explore if you base yourself in the town. From challenging all-day hikes to easy-going, but equally as rewarding, paths for more casual ramblers, there’s plenty for when it comes to walks near Scotland’s largest city.

Ben Lomond is actually one of the highest mountains close to Glasgow. At 974 meters, it’s one of the tallest peaks in the spectacular Loch Lomond & The Trossachs National Park, which is only about an hour’s drive from the biggest city in Scotland. It’s also one of the most popular Munros in the country thanks to the easy access from the major cities and the relatively easy way up. Those that make it to the top are also rewarded with fantastic views over the lochs below and the Highlands in the distance.

The best way to get to the start of the hike is to drive to the bottom of the trail, which starts from the Rowardennan Car Park. You will have to pay a small fee to park there. Alternatively, if you don’t have a car, you could get a bus to Tarbet from Buchanan Bus Station in Glasgow and then a ferry across to Rowardennan, which arrives just below the car park. The journey should take around two hours in all.

It takes around two to three hours to get to the summit depending on your speed and fitness. It’s a clear and well-marked path with a few rocky sections. All in all, it’s a relatively gentle way up, which means you don’t need any special equipment beyond good hiking boots and weather-appropriate clothing.

Ben Lui is one of the most impressive peaks in the Southern Highlands, sporting an iconic Alpine-like look. At 1,130m, it’s also among the highest peaks in that part of Scotland, so you can be sure that you’ll be rewarded with fantastic views from the top. You can easily get to the bottom of the trail by driving for about 1.5 hours from Glasgow. Alternatively, you can catch one of the frequent buses that pass along the A85 towards Oban from Glasgow.

The easiest and shortest trail starts at Glen Lochy Forestry Car Park. It takes between two and three hours to reach the top depending on your fitness level. The route is quite steep and demanding, and you will have to cross the river and walk through muddy sections at the bottom. Sadly, there is no bridge, so you can’t escape going through the water! Further towards the top, the path gets a little rockier and steeper, so make sure to wear good waterproof boots that have a good grip.

You will pass through Beinn a’ Chleibh on your way, which is a great spot to rest before you push on. The views from there are lovely, but nothing on what you get from the very top of Ben Lui, so keep going!

Duncolm is the highest point in the Kilpatrick Hills that sit to the northwest of Glasgow. You can reach it on the same A089 that runs towards Loch Lomond & The Trossachs National Park in about 50 minutes from the city center. Alternatively, follow the Clyde going west. You won’t miss it as it stands like a lonely boulder on the side of the road between farm fields and groups of pine woodland.

There’s a straight up and down walking path that you can take to get to the top. It begins at the Kilpatrick Braes parking area and then forks straight off onto the base of the hill. The return route is on the long and open ridge of The Slacks, a peak that stretches from Old Kilpatrick village (one of the last suburbs of Glasgow city) to Duncolm itself.

Expect a pretty spectacular view from the top. Looking north, you’ll be able to see the outline of the Ben Lomond foothills and Conic Hill. Looking south, you can see the start of Glasgow itself. We also like that Duncolm is accessible by public transport via trains into Kilpatrick Station.

The Campsie Fells aren’t just one mountain but a whole string of them. They link the edges of Stirlingshire to the city in East Dunbartonshire, topping out at just over 570 meters above sea level. That highest peak is Earl’s Seat, a grassy mound that comes straight out of a barren plateau and can be hiked via a path that starts at the Glengoyne Distillery (drink anyone?).

Earl’s isn’t the only one worth coming here for, though. There are a range of other hikes in the region, including Bar Hill, a raised mound between the farms that has an ancient Roman fort dating from 140 AD, and Cort-ma Law, a lower peak to the east that offers fantastic views of the Campsie Fells and Earl’s Seat.

This whole hiking area is really easy to reach from Glasgow. It helps If you have your own car – the A81 can take you right to most of the starting points for the walks from the north side of the city in about 30-40 minutes.

The second of the mountains close to Glasgow that sit within the boundaries of the Loch Lomond & The Trossachs National Park, Beinn Ime is actually the highest of all the Arrochar Alps – a dramatic range of amazing peaks that dominate the northernmost part of the reserve.

You’ll see it long before you reach the base. It rises high above the grassy lowlands north of Glasgow, sometimes gleaming bright white because of its snow dusting in the middle of the winter. The roads that take you in are quite fantastic in themselves, too – they navigate Loch Lomond and Loch Goil through golf courses and protected woods, taking just over an hour in total.

Hikers can pick from three routes to get to the top of Beinn Ime. The first is the start of the path to get to the top of The Cobbler, the next-door mountain. The second is a popular way up that begins on the A83 pass closer to Loch Lomond. At the summit, you can look west to take in the wilder area of Argyll, where Scotland breaks up into the Atlantic Ocean.

The strangely named Cobbler is one of the most striking peaks of the Arrochar highlands. It manages an altitude of 884 meters up, which puts it just under the requirement to be a full munro (3,000 feet). If you’re wondering about the name, that’s down to the unusual shape of the mountain as seen from the side – people say it looks like a shoemaker leaning over his work desk.

There are actually three individual peaks that make up the whole of the massif here. They were all formed by the movements of glaciers in the last ice age. The middle is the highest and the one that most hikers aim for. In total, expect to walk for four to six hours to reach the top.

Again, even the route that takes you from Glasgow to the base of this mountain is something worth mentioning. It’s a winding A road that goes right through the middle of a national park before running alongside the edge of a loch and then through the lodge at Ardgartan. It takes a little over an hour from the city in all.

Getting up this far does require a little more work if you’re coming in from Glasgow. In total, the trip is about 1.5 hours, making its way along the winding country roads that go through Stirlingshire and the lower hills immediately north of the town.

This is probably one of the most challenging hikes you can do in the whole Glasgow region. The main path up involves a steep ascent that gains 1,000 meters in altitude in less than three miles. Those seeking a slower path can visit the north ridge, where there’s also some handy forest coverage for walks in the hotter summer months.

Mountains close to Glasgow – the conclusion.

Are there any mountains close to Glasgow? Oh yes! You can reach some of the highest peaks in the country within just a short drive from the center. There are plenty of easy-going hills just a stone’s throw from the city, but if you’d like to hike munros, you will need to travel for at least an hour north. Relatively easy but very rewarding Ben Lomond is one of the most popular hikes for Glaswegian visitors, while Ben More is up there with the most challenging treks in the area.