With low crime rates, Switzerland is one of the safest countries in Europe. However, among the many mountains and forests that cover this small nation, there are several creatures that may cause you harm. Next time you’re out hiking in the vast Swiss wilderness, be cautious of the dangerous animals in Switzerland that you may encounter.

Although animals rarely attack humans, this part of the world is full of venomous creepy crawlies, predatory birds, and large, powerful mammals. Any of these has the potential to cause serious injury or even death. Keep yourself safe by doing your research.

There’s no doubt that the Swiss countryside is full of unparalleled natural beauty. However, hikers need to beware. Below, you’ll learn all about the 7 most dangerous animals in Switzerland so you can stay safe while in the great outdoors.

One of the most dangerous animals in Switzerland is undoubtedly the wild boar. They can be found in the nation’s forests, particularly in the Jurassic Mountains, the Rhone Valley, and the Low Lands. If you happen to be hiking in any of these areas, then be very careful. If they feel threatened – or they’re protecting their young – then these beasts have been known to attack.

Many people don’t realize how big wild boars are, especially up close. They can weigh up to 220 lb and run at 30 mph. When they charge you down, the impact is enormous. It can knock you to the floor, causing serious damage to your lower body in the process. Those tusks are no joke.

When in the forests of Switzerland, make efforts to keep an eye out for boar. They’re big and run quickly, making quite a noise as they do so. If this happens, head in the opposite direction. You don’t want a confrontation with this animal, which is also known for spreading serious diseases.

Deer aren’t known for being prolific predators, but they’re actually one of the most dangerous animals in Switzerland. The male red deer has huge antlers and can become aggressive, especially when trying to prove its dominance during the mating season. If you’re in the way of a female, it could charge you down to get you out of the way. They don’t mess around.

We can’t find the stats for Switzerland but in America, no animal kills more than deer. These deaths are usually accidents, though, including them stepping out into the road and causing car crashes. While driving in Switzerland, always be sensible and keep an eye out for deer.

The best way to avoid becoming the victim of a buck’s rage is to simply keep your distance. They aren’t interested in chasing or attacking you and are only aggressive if you invade their personal space. If you keep well away, then you shouldn’t come into any serious trouble.

Wolves inhabit much of Europe, especially countries like Germany and Estonia. However, they can also be found roaming the Swiss countryside. Although there are officially only around 35 wolves in the entire country, others can wander across the borders from neighboring regions. If you encounter them, then they have the potential to cause serious damage with their strong jaws and large teeth.

Fortunately, wolf attacks are extremely rare. Across Europe, there have only been around eight fatal attacks in the last 60 years. However, this only proves that the potential to kill is there. Just because they look like dogs, don’t try and pet them. Leave them well alone and keep your distance. They won’t want to eat you but they may attack you to protect their pack.

Sometimes, wolves may also attack because they mistake you for prey. You can avoid this by wearing brightly colored hiking clothes. This distinguishes you from the deer that wolves hunt. Wolves are generally shy and won’t go near you if they spot you.

Switzerland is home to several venomous animals, including scorpions and spiders. However, the vast majority of them cause minimal harm to humans. The same can be said of the European viper. However, this is a particular foe that you should avoid. They’re very common and hard to spot, often blending into their surroundings. If you accidentally step on one, it will want to bite you in order to protect itself.

This bite generally leads to an itchy, inflamed spot, similar to that of a bee sting. However, if you’re elderly, very young, or ill, it can have more serious repercussions. Many people are also allergic to these bites and have very severe reactions. If this describes you, then make sure you receive anti-venom medication as soon as you’re bitten.

These vipers like sunny, mountainous locations. Therefore, you should keep a lookout when hiking in the Swiss Alps or the Jura Mountains. Just be careful not to disturb them and you should get through the entirety of your trip without a nasty snake bite.

In general, you shouldn’t have to fear golden eagles. There are around 700 of them in the Swiss Alps but they’re generally looking for rabbits and grouse. They may go after larger mammals but only when they’ve already died. Humans are far too large, which is why eagle attacks on humans are unheard of.

Having said that, they certainly have the potential to cause serious damage. If you were mistaken for a smaller mammal, they might try and grab you. Their talons are comparable to the size of a grizzly bear’s paws and could cause a huge gash in your body. Just to be safe, don’t try to disturb the nest of a golden eagle should you come across one.

Furthermore, if you’re seriously injured, an eagle might try and eat you as carrion. They’re not picky eaters and any open flesh wound could attract them. If you’re hurt, immediately seek a safe space where you can receive medical attention. Don’t try and keep hiking. Your wounds will attract more than just eagles, as well, such as wolves and vultures.

In recent years, there have been increasing reports of vultures attacking humans. While these reports are yet to be proven, there’s no doubt that a vulture is large and powerful enough to cause serious damage. Since 1986, conservationists have been releasing vultures into the Swiss mountains, meaning that there’s a chance you’ll come across one.

Vultures are often associated with Africa, where they’re the most common. However, their populations in Europe are rising. Many hikers don’t realize the potential dangers they pose, which is perhaps why reports of attacks have risen. Nevertheless, the chance of one attacking you is rare.

The main danger will arise if you decide to disturb them. They have the physical power to attack you as a form of defense. You’re too large to be easily picked up and taken away, though, so they’re not going to attack you for no reason. As their population numbers rise, it will become increasingly important to be cautious of these majestic and beautiful creatures.

Lynx are beautiful, playful animals that act similarly to regular domesticated cats. Being wild, though, they’re likely to be shyer and potentially more aggressive. They don’t want to be stroked and cuddled so if you see one in a bush, leave it alone. Lynx don’t go after humans but they’re excellent hunters and will do serious damage with their claws and teeth if needed.

When cornered, a lynx has no choice but to attack. They’ll be even more likely to do this if they’ve got cubs to protect. Don’t threaten a lynx but rather observe them from a distance. These are wonderful creatures who can be easily spotted during the summer. In winter, they hide in bushes for warmth but, like any cat, they love to sunbathe out in the open.

There are around 100 lynx in Switzerland. You can find them in the Jura Mountains and the Northwest Swiss Alps. Just be sure to take precautions around these animals because they can become dangerous if provoked.

What is the most dangerous animal in Switzerland?

Most experts agree that the European viper tops the list of the most dangerous animals in Switzerland. Although fatalities are rare, you’re likely to come across this creature and can easily step on it by mistake. It may then bite you in defense, which can cause serious pain if you’re allergic to its venom.

Does Switzerland have venomous animals?

Yes, Switzerland has venomous animals. These include venomous vipers, spiders, scorpions, wasps, and bees. However, their bites will only cause serious injury if you’re allergic to this venom.

Are there bears in Switzerland?

Officially, no. The last wild bear is said to have been killed in 1904. However, neighboring countries do have bears and some travel across the border into Switzerland. That’s why there have been a few brown bear sightings in recent years.

17 Things to Avoid in Switzerland for a Smooth Trip 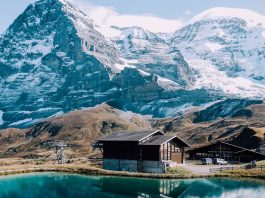 Mountains Close to Geneva: 9 Mountains You Should Visit