Home Europe Portugal The 7 Warmest Places In Portugal? Where To Find The Sun

Craving some uninterrupted European sun? Want to laze on Atlantic beaches without worrying about rain? Looking to top up the tan between tasting the Douro wines and exploring the age-old historical districts of Lisbon? Cue this guide. It lists seven of the warmest places in Portugal, offering suggestions for spots where you can go that all but guarantee the mercury will remain nice and high.

The Algarve – Portugal’s southernmost region – features heavily, of course. It’s usually bathed in sunshine (over 3,000 hours of the stuff per year, apparently) and comes with oodles of beaches to boot. On top of that, there’s a mention for the sub-tropical archipelagos of the Azores and Madeira that sit out in the Atlantic. Oh, and even some time for far-flung hill hamlets close to the Spanish border.

Wherever you choose, be certain to take along the sunscreen and the sunglasses. Each of these destinations can boast mercury highs well over the 70s, and sometimes above the 110s! Of course, winter, spring, and autumn should see things cool off a little, with the hottest period of all coming between May and September.

The climate in Tavira must have something going for it. The ancient Romans came here more than 2,000 years ago and liked it so much that they decided to set up a city. So, too, did the Moors from North Africa. And before the whole lot, Phoenician settlers are thought to have colonized this stretch of coastline sometime around the Bronze Age (that’s 900 BC, folks!).

Today, Tavira remains a very attractive prospect for those who like their European holidays bathed in sun. There’s a whopping 3,200 hours of rays per year here. What’s more, temperature averages go from 52 F to 75 F as the seasons change, though midsummer can see peaks of a sweat-inducing 102 F! Phew, that’s hot. Just be sure to pack the sunscreen and the pocket fan.

Tavira is just a little bit back from the coast in the far depths of the eastern Algarve. Both of those things help to keep it warm, by cutting down the stronger ocean winds that come across the Atlantic seaboard. Don’t worry, though, there’s plenty to help you cool off, not least of all the seven-mile stretch of barrier island and its soft, powdery sand down on Praia do Barril.

Vilamoura has a rep for deluxe living and R&R. It’s one of the south coast’s retiree hotspots. Folk from northern Europe who are done with the snows and rains of Scandinavia and the UK come December will often flock here to settle in sea-view condos with a golf course on the doorstep. All that’s helped to make the town one of the biggest continuous tourist resorts on the continent, counting nearly 5,000 acres of development in all.

It’s easy to see why it’s so popular among the sun seekers: Vilamoura sees daily highs of between 67-75 F as late into the year as November and October, and daily means easily sit in the mid-70s between June and August. Finally, the area has seen some of the highest recorded mercury peaks in the Algarve, hitting 111 F on a number of occasions.

That’s probably a little too balmy to be out on the numerous golf courses. Thankfully, Vilamoura is fronted by long runs of golden sand and flanked by the famous beaches of the Western Algarve. The best around include long, uninterrupted Praia da Rocha Baixinha and the cliff-backed coves of Praia Maria Luísa a little along the shoreline.

Amareleja might only be home to 2,500 people, and sees just a fraction of the visitors of the Algarve’s coastal resorts, but it surely deserves a spot on this list of the warmest places in Portugal because it’s where the highest ever recorded temperature in the country occurred back in 2003. Yep, the pint-sized village of Amareleja managed an egg-frying 117.3 F on a particularly sizzling August afternoon. Needless to say, the sun was shining, too.

But, while a trip to Amareleja might be balmy, it might not be what you’re used to from Portugal. The village is hidden up in the hills of the district of Beja, just a stone’s throw from the Spanish border. Instead of gold-sanded beaches and cooling surf swells, it’s beset by sylvan hills and olive groves. The main sights are the Game of Thrones-esque Castelo De Noudar and the eagle-filled skies of the Valley of Guadiana Natural Park to the south.

Another Algarvian town with stacks of character, Vila do Bispo is a lived-in pitstop on the western coast roads. It’s hot, just like the rest of the region, touting regular peaks of 77 F or more, with some days that go over 90 F! But it might feel even warmer here than in neighboring Algarve hotspots like Lagos and Tavira. The reason? Vila do Bispo is roughly five miles in from the coast. That cuts out the Atlantic breezes that can cool and temper the scorching summer elsewhere along .

That’s borne out by the stats, too. Vila do Bispo lays claim to the honor of having the fewest heating degree days (HDD) in all of Europe. That’s a measurement of the estimated demand for heating throughout the year. To translate: It means people aren’t firing up the boilers or wood stoves too often. It’s just not needed.

Thankfully, there are lots of places to go to escape the heat. Vila do Bispo sits on the join between the south coast of the Algarve and the wild west coast of the Algarve. The surf bays of Sagres are close, and so are the wave-slashed shores of the beautiful Costa Vicentina. But you could also detour down to the tourist-favs of Salema, Luz, and Lagos (they’re all less than 30 minutes’ drive).

No list of the warmest places in Portugal could possibly be complete without at least a mention of the country’s southernmost inhabited point. Cue Madeira. This sunbaked isle out in the Atlantic Ocean is surely up there with the balmiest destinations in the land of salt cod and surf. But then what would you expect of somewhere that’s closer to Morocco than it is to the Algarve?

Average temperatures tend to hover around a modest 60-70 F, with the variation of mean temperatures from 62 F in the winter to 72 F in the summer. However, it’s more that Madeira is constantly balmy and hot. You can pretty much plan a vacation here any time and not worry too much about the weather. That said, summer still reigns supreme because November to March is the rainy season.

There are also loads of pursuits here that will help you make the most of the fantastic climate on Madeira. Hit the vereda hiking paths that weave into the wooded mountains of the main island and you’ll be wowed by highland vistas and encounters with strange endemic animals like the Madeiran wall lizard. Or, just stick the coast, where ocean-view bars and black-sand beaches like Praia do Porto do Seixal beckon under the sun.

You’re probably not going to want to plan that winter-sun vacay here. Why would you? These tiny dots on the map really do live up to their name. They’re little more than scarred protrusions of rock emerging straight from the ocean, with blasted ridges of black volcanic stone and hardly a tree in sight (AKA, there’s not a spot of shade to hide away in).

Officially, the Savage Islands mark the southernmost point in Portugal. In fact, they are closer to the Spanish Canaries than to their PT neighbor of Madeira, at a latitude that gives them a subtropical desert climate. The main thing to know is that there’s very little annual variation in average mercury levels. Come here in June and you’re looking at daytime means of about 75. Come in mid-December and you’re looking at about 68 F. Occasionally, the stars will align and scorching Saharan dust clouds will come over, too, which cranks up the heat to dizzying levels.

The Savage Islands remain totally uninhabited save for a few dedicated research scientists working on preserving the endemic flora and fauna. The only way to get here is by boat, on a long and surely stomach-churning voyage out of Funchal or Santa Cruz. On second thoughts, we’ll stick to the Algarve!

Speckling the heart of the great Atlantic Ocean a whopping 1,000 miles or so off the edge of mainland Portugal, the Azores are a wondrous place. Lush and green, spiked with volcanos, dashed with laurel forests, and beset by whale-filled waters, they’re unlike anything you’d expect of Europe. They’re meccas for adventure travelers, touting hikes to caldera lakes, bathing in hot springs, and sailing galore.

And it’s not just the sights and the backcountry that’s unique here. The archipelago straddles a strange climactic zone. Half of the islands are within an area that’s designated as Mediterranean under the Köppen climate classification, while the other half are in a humid sub-tropical zone.

That means those on the hunt for the warmest places in Portugal would do well to look to the eastern side of the Azores. Islands like rugged Corvo and Flores await there, offering August highs that can peak well above 85 F. That said, the whole of the Azores group is pretty darn balmy. Check out the temperature oscillation on the main island of São Miguel, which goes from around 60 in midwinter to consistently above 70 in the summer.

So, where are the warmest places in Portugal?

The warmest places in Portugal are located in the south of the country. The Algarve is generally the balmiest region, with towns like Lagos and Vila do Bispo that can get positively sauna-like when the summer swings around. You might also want to check out the hill villages of the Beja district, where the cooling effect of the Atlantic Ocean is a distant memory. And then there are the subtropical islets of Madeira and the Azores, even if getting to those involves a flight from Lisbon or Porto.

Which part of Portugal is the warmest?

The Algarve is the warmest part of Portugal. It covers the whole southern side of the country with its olive-dashed hills and glorious beaches. Towns like Tavira, Lagos, Albufeira, and Luz make it a tourist paradise, too. Expect temperatures here to peak over 100 F in the height of the summer.

Is Portugal warm in winter?

It can be but it all depends on where you go. Madeira can stay hot for the whole year, with averages hitting 65-75 F, even in December. The Algarve can also see lots of warm days, but we’d still say it’s better to wait until spring if you want a true beach vacation.

What is the warmest part of Portugal in the winter?

The warmest part of Portugal in the winter is probably the island of Madeira. It manages to keep up a regular wintertime temperature that’s close to 70 F, mainly because it’s so far south. It’s also worth checking out the Azores and the Algarve, where temperatures between 55-65 are normal from November to December. 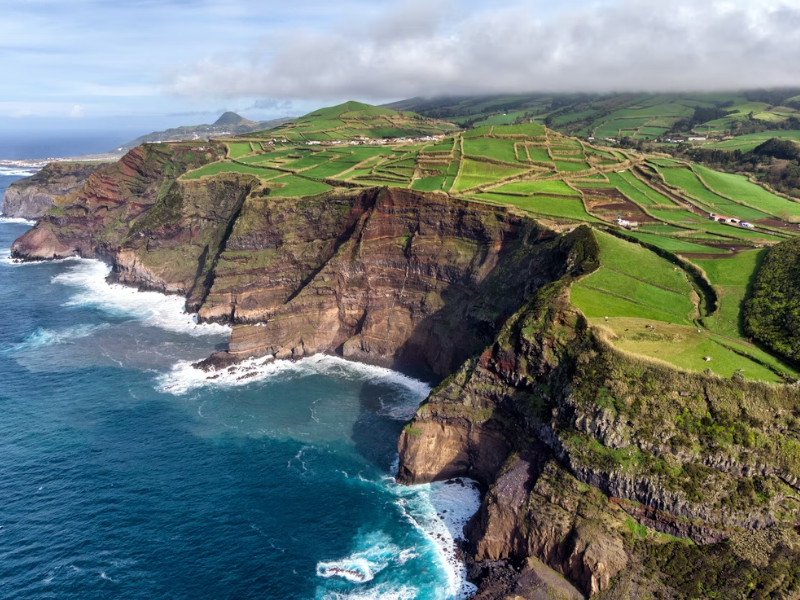