The age-old debate of London vs New York is one that’s been pressing city lovers for decades. Both densely populated, ever-competitive, and arguably more iconic than any other two cities in the world, it seems that London and New York have more in common than that which divides them.

New York City is so alive that it’s dubbed the “City That Never Sleeps” and this non-stop intensity seeps into everything from the fashion to the culture and the innovations. But just over the pond in London, you’ll find as much heritage and beauty as modernity. Phenomenal theatre, exceptional art, and iconic skylines are just some of the things these cosmopolitan powerhouses share, but they’re more different than you might think.

If you are stuck between London and New York, there are worse positions in which to be. Still, that doesn’t mean choosing will be easy. From the costs and the food to the energy that reverberates off every skyscraper, brownstone, and Victorian terrace, this guide measures London against New York to decide on a winner, once and for all. Let’s go.

The Big Smoke and the Big Apple, it’s safe to say London and New York need no formal introductions. Still, you might be surprised to hear that the English capital is 50 percent larger than its American counterpart in square mileage, with enough landmass across all its boroughs to feel like a small country.

This means, with their near-identical population sizes just shy of nine million, New York is considerably more crowded. The American giant has a population density more than any other US city and almost twice that of London, and it shows. From the crime to the crowds, the living situations, and the rush hour subway carriages, London is busy, but New York is on a different scale. Yet, this isn’t all bad.

Part of New York’s charm is its non-stop energy. “The City That Never Sleeps” has every amenity available at all hours. People might fill the streets and barge past if you’re not going at their pace, but the fact is, they’re all going somewhere and New York’s drive is infectious.

Despite its larger size, London isn’t necessarily more comfortable. It might be vast, but New York has more man-made space in comparison with 6,000 high-rise buildings standing more than 150 meters tall. London also has narrower pavements compared to the wide New York sidewalks, with chaotic Roman-meets-Tudor-meets-Edwardian road systems. This all makes London feel equally cramped and crowded, especially in the compact center.

Still, London’s eclectic mix of architectural styles and fascinating history, well-preserved by the landmarks, is unrivaled. London was founded in 47 AD and some Roman ruins are still around today. New artifacts are constantly being uncovered and London is a city that reveals its history to visitors and residents in its own way. From Covent Garden’s Tudor public houses to the tens of thousand Victorian terrace homes that comprise the suburban boroughs, heritage is everywhere and with that, New York can’t compete. The Big Apple isn’t even 400 years old and there are just a small few buildings in Manhattan that were built before the 1800s.

So which is more popular? Surprisingly to some, New York draws more than double the number of visitors per year with 65.2 million compared to London’s lowly 30 million, winning the tourism contest. Whether this adds or detracts from the vibe, you decide. But we think it’s a testament to just how iconic New York is.

London vs New York: Getting Around

Buses, subways, and cabs, it’s all to be expected from a major city. While London and New York can’t compete with Tokyo’s bullet trains by any means, both cities are easy to get around.

The underground railways are the preferred way of travel for most visitors and residents to the two cities. London has the tube and New York has the subway but they’re not as similar as they look. With 24 lines, over 400 stations, and near-700 miles of track, the subway covers a far larger area than London’s tube, connecting the city with the suburbs and beyond. The London Underground has just 11 lines, 270 stations, and 250 miles of track and fails to connect all boroughs to the city, much to the dismay of South London’s residents.

Still, the New York subway is notoriously slow. With an average speed of 17.4 miles per hour, long station waiting times, and constant delays. If you’re going a short distance, it’d be quicker to walk than travel by subway. The average speed on the London Underground is 21 miles per hour, and that includes waiting times. In fact, the London Underground is one of the world’s most reliable metro systems. It’s cleaner, more punctual, and each individual line tends to be longer than New York’s making it easier to navigate and get around. New York’s subway achieved the worst on-time performance rates of any major city in the world in 2017, declaring a state of emergency. Cheaper or faster? You decide.

The all-important question of cost is one that is particularly prescient in the case of these two cities. If budget travel is what you’re after, we should stop you right here, as London and New York are among the most expensive places in the world. But residents and tourists will all tell you something different about which costs more, and it depends on your experiences. So let’s break it down to see how their averages compare.

Most residents of both cities don’t pay near these amounts, with cramped flatshares and subletting being the norm. But New York is still much more costly when it comes to rented accommodation and the cities come out pretty equal on hotels and vacation rentals.

Consumer prices, restaurant prices, and groceries are all 20 percent cheaper in London, although basic amenities and street food are largely priced the same. Mid-range restaurants, alcohol, and entertainment hike up this difference with dinners costing around $100 (£75) for two people in NY but closer to $80 (£60) in London. Transport is one area where New York comes out on top and there are ways to save elsewhere in the Big Apple, but if it’s your budget you want to protect, London wins.

New York has its reputation for a reason with a nightlife that goes on well into the morning and bars and clubs that stay open even on a school night. But London is by no means pale in comparison. Although most pubs close around 11 pm, bars and clubs are rammed until 3 am on weekends, and a select few go until the birds are chirping (that’s seven or eight in the morning for you and me).

London also has a higher number of nightlife establishments, with the party spreading from the jazz clubs of Soho to the streets of Clapham, Peckham, Beckenham, and beyond. But as a smaller city, New York has a higher concentration of bars and clubs, and it’s not hard to find a good time in either city.

New York’s convenience could make it more entertaining for nightlife lovers, but London has more diversity. The restaurant scenes in both cities are also greatly appealing. New York steals a win for having twice as many Michelin Star restaurants, but London’s markets and street foods reign supreme. New York might have pizza slices as big as our heads and hot dog carts on every corner, but London has this too, even if it’s less associated with English culture.

While New York has Times Square, the MOMA, Fifth Avenue, and Madison Square Garden, London has Picadilly Circus, the Tate, Oxford Street, and Wembley Stadium. You can go to the opera, the ballet, and comedy shows in both cities, and the West End’s shows are on par with Broadway’s, although some might disagree. Street performers, museums, galleries, and walking tours, you name it, you can do it, and it is often free. There’s no competition, neither London or New York can be flawed when it comes to keeping busy.

London is notoriously portrayed as having poor weather and a lot of rain, warranting warm mugs of tea and winter hibernation. But it’s actually one of the warmest places in the UK, and getting warmer – no thanks to global warming. And the biggest shock of all? New York actually gets more rain than London, with the highest monthly average being double that of England’s capital. This might be over fewer days, but the unpredictable nature of New York’s climate isn’t as appealing as it might seem.

London is mild and temperate, and while New York also has a maritime climate, she experiences all the seasons to more of an extreme. Scorching summers and heavy winter snowfall can make the city difficult to navigate outside of fall and spring. New York is also susceptible to hurricanes which can threaten to throw the city into chaos every year. Deadly storms seem to happen once a decade, but the city is vulnerable to hurricane winds every June through to November.

Summers are short but pleasant in London, with averages in the high 70s and winter lows of 40 degrees Fahrenheit. Whereas, you’ll likely see temperatures sit at 20 to 30 degrees Fahrenheit throughout New York’s winter months, with summer hovering in the low 80s. Less rain, less snow, and less danger mean London comes out on top.

London vs New York: The Verdict

There’s no way to say whether London or New York is better to live in, or even to vacation. This all depends on personal preference and a lot of constantly changing factors about both cities. At a first glance, they seem painfully similar and this is because each city has adapted to the other’s innovations to create a level playing field of cosmopolitan ideals.

New York with its infectious energy and drive is one of a kind. Round-the-clock conveniences, 24-hour nightlife, and everything to an extreme, it’s a place for go-getters, dreamers, and city-slickers. But the cost of living is extortionate, living conditions are cramped and the weather can be scary. London stands in all her glory on the other side of the pond with an iconic skyline that dates back not just hundreds, but thousands of years. Where old meets new, London is everchanging but its regal appeal remains the same. We know which is our winner, but what about yours? Make your decision a quick one, because just like those towering high rises, prices are only going up. 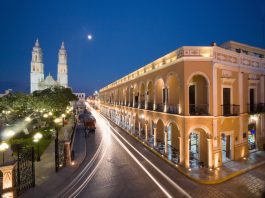 The 7 Most Underrated European Travel Destinations In 2022

Sardinia or The Amalfi Coast: Which Italian Resort is Right For...