Home Europe Greece The 7 Best Places To Sail In Greece: Islands And Mainland

So, you’re wondering about the best places to sail in Greece? That’s a tough one. This country clocks up 15,000 kilometers of coastline across its mainland and a mega 6,000 islets and islands. It’s also the island hopping mecca of Europe and a destination known far and wide for its gleaming beaches and fine climate.

What we’re trying to say is that there are LOADS of potential sailing hubs in this corner of the Med. Popular hotspots like the Cyclades Islands – for visions of Santorini and party nights in Mykonos – combine with lesser-known regions like the southern peninsulas of the Peloponnese, offering virtually endless choices for the would-be skipper.

This guide will run through just seven of the best places to sail in Greece to help you pick the one that’s right for you and your crew this year. It’s got options in all quarters of the country, from the far-flung eastern Aegean to the gulfs that rub shoulders with bustling Athens. Let’s go…

The island of Poros is only an hour or so by boat or public ferry from the port of Athens, Piraeus. That’s helped it rise to become one of the sailing meccas of the Saronic Gulf – the 35-mile-wide stretch of sea that runs between Attica in the east and the Argolis in the west.

Come the spring and summer months, the whole of the marina area that fringes Poros town is positively awash with boats. There are catamarans and millionaire yachts, there are small skiffs and slender 40-foot monohull yachts. Many are owned by rich Athenians who come here to escape the buzz of the capital on the weekend, but there’s also a good international showing of German, French, and British sailors.

There’s no doubt that Poros is a pretty fantastic place to weigh anchor. From here, you can do day sails out to the famous island of Hydra (more on that below) or scour the rugged ends of Cape Sounion to see the lonely Temple of Poseidon glowing in the sunset. Poros itself also has some pretty special things up its sleeve, from hidden beaches like Love Bay to rows of charming tavernas along a bustling quayside.

The summer winds blow strong in Crete. They either come from the north with the meltemi systems that filter down from the Balkan Peninsula, or they come across from Africa, often bringing the scorching heat of the Sahara in tow. Either way, there’s usually something to make the sail bulge in these parts, which is great news because there’s loads to explore in Crete.

Yep, this one’s the largest island in the whole of Greece and one of the largest islands in the Mediterranean besides. It measures over 150 miles from end to end and has two very different coastlines on the north and south. The main ports are up north, though, in the major cities of Chania and Heraklion.

The southern side of the island is beset by high mountains and even has some villages that you can only get to by boat. We especially love the sailing that’s to be done around the rugged region of Hora Sfakion. It’s the home of the wild Samaria Gorge and the Aradena Gorge, which end at beaches and towns like Loutro that you simply can’t get to by car.

No list of the best places to sail in Greece could possibly skip out on Hydra. Another of the Saronic Gulf islands that speckle the northern Aegean, it’s within a day’s sail of Athens with a good wind. That ensures it’s pretty busy in the peak sailing season between May and September, and the buzz is only added to by the crowds of day trippers that flock over from the capital.

But don’t let the tourist hordes put you off. Hydra is replete with hidden inlets and coves where you can pull in and drop the anchor for a swim. The waters are famously crystal clear on account of the rocky geology of the island – it’s a place where long, sandy beaches are replaced by craggy cliffs and pebble coves.

The main town – and an unmissable spot in our opinion – is also called Hydra. It’s 100% car free and has a certain artistic chicness to it (Leonard Cohen even came here to write songs!). Head down to the main marina area there to find gorgeous tavernas like Lulus and legendary sunset venues like the Spilia Beach Bar.

Most sailors see Lefkada as the gateway to the Ionian Islands of western Greece. They represent a region that’s known for its shimmering white sands and turquoise waters, with beaches like the uber-famous Shipwreck Bay on the menu. So, it’s easy to see why you might want to hop aboard in these parts!

Lefkada itself, also known as Lefkas, has a few things that make it the natural sailing hub of the area. First, its eastern coast is well protected from the swells that roll down from the Adriatic and make it harder to establish harbors. Second, it’s got a road connection to the mainland, so it’s easy to transport gear, goods, and people to the ports here.

On top of that, Lefkada is smack dab in the middle of Ionia. You can sail north to explore Corfu, an island of soaring mountains and lush pine forests. You can go south to Zante, where turtles crawl the beaches and buzzy party towns dot the south coast. Or just stick around Lefkada. The island is a downright stunner in its own right, especially thanks to the likes of Gialos Beach and Porto Katsiki on the western shoreline.

The Peloponnese is a vast area of Greece that’s often coupled with the mainland but is actually fragmented from the rest of Europe by the Corinth Canal and the Gulf of Patras. It starts about an hour’s drive west of Athens and ends on the cusp of the Ionian Islands even further west. Along the way, it proves that it’s surely up there with the best places to sail in Greece.

Shaped like Poseidon’s trident, the region spikes the northern Aegean Sea with a trio of peninsulas. Each has their own joys and draws for sailors. The easternmost is the Epidavros Limira province, which finishes with rugged Cape Malea. The westernmost is Messenia, where you can find sweeping bays of golden sand. But it’s the middle peninsula that really takes the biscuit…

Known as the Mani, it’s a wild and rural region that still clings steadfastly to ancient traditions. The landscapes here are sheer drama – think 2,000-meter-high mountains that tumble directly down to inky Aegean waters. Even the towns look different to the rest of the country; made of stone and rough terracotta, with seaside tavernas that serve simple fish and salads by the lapping waves.

It’s basically impossible to pick just one of the Cyclades Islands to put on this list of the best places to sail in Greece. So, we thought we’d plump for the whole lot of them. But there’s method in our indecision, since the Cyclades are the piece de resistance for folks looking to plan a proper Greek island hopping trip.

Why? Well, there’s 220 of them in total, so you’ve got no shortage of destinations to fill the itinerary. On top of that, basically all of the Cyclades are within a single day’s sail of each other, so getting from A to B by boat should be a cinch here. Oh, and this chain is home to some of Greece’s undisputed must-see locations…

Santorini tops the bill. It’s a dramatic volcano island that soars straight out of the Aegean to white-painted towns high on the cliffs. Then there’s Mykonos, the LGBTQ+ hub of Europe and a party island for all. Ios is also hedonistic to a T, plus home to secret beaches. You’ve also got Paros, for the families, and Milos, for the beach lovers. We could go on and on and on.

Rhodes caps off our list of the best places to sail in Greece because it’s the steppingstone to the easternmost island chain in the country: The Dodecanese. But it’s also a good option if you want to extend your travels even more, perhaps with a jaunt across to the far reaches of the Aegean Sea to Turkey and the fabled Turquoise Coast – that’s about an hour’s sail across the strait.

Most charters will begin in the large harbor of Rhodes Town. From there, you can easily sail out and explore the southeast coast. It’s famed for snorkeling hubs like Anthony Quinn Bay, but also the gleaming arc of sand at Lindos. The north coast tends to be rougher going but is usually less crowded at bays like Kameiros and Κοpria.

You’ll also need to head north to get into the heart of the Dodecanese. Symi is a must if you ask us. Sleepy, hemmed in by pastel-painted Venetian homes, and now something of a culinary hub, it’s a joy to visit by boat. We also think Kos should be there, since it’s got something for everyone – think forests filled with butterflies, pine-scented mountains, and beaches warmed by underwater hot springs.

The best places to sail in Greece – our conclusion

It should hardly come as a surprise that there are oodles of contenders when it comes to picking the best places to sail in Greece. From the iconic whitewashed towns of the Cyclades Islands to the idyllic beaches of Ionia to the accessible rocks of the Saronic Gulf, you’re never really more than a couple of hours’ sailing from some of the world’s finest boating destinations!

Best Breakfasts in Paros: 7 Tasty Spots on the Island 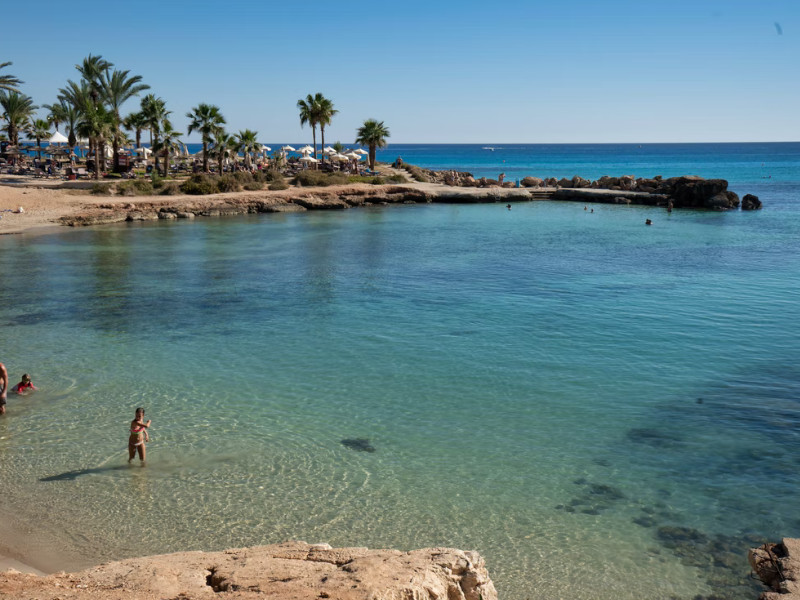 Cyprus Or Greece? The Battle Between Mediterranean Hotspots