Wrap up warm, pull on the thermals, wax down the snow boots – you’ll need all that and more if you’re off to seek out the coldest places in Finland. Yep, this northerly country manages to take you to the very extremes of Europe. It pushes deep into the Arctic Circle and far above the latitude line where the sun shines for the full 12 months. It’s going to get freezing, folks.

This guide to the coldest places in Finland will reveal a few of the top spots for travelers who like it icy and covered in snow. It pits some uber-famous locations, like the home of Santa himself in Rovaniemi, against lesser-known destinations, like the gold-rush town of Tankavaara or the tech city of Oulu.

We’ve tried to focus on places that have at least some significant population and year-round inhabitants, along with spots that are on the tourist radar. There are lots of other sub-artic parts of Finland that we haven’t delved into, but we’ll leave that to you and your husky sleds, just in case you want to expand the adventure a little bit more.

Check the map of Finland – Nuorgam is just about as far north as it’s possible to go without crossing the border into Norway. That should speak volumes to climate buffs because it means that this little town is the deepest into the Arctic Circle of any named settlement in the country. It’s actually little more than a cluster of cabin-style hotels aimed at the Northern Lights seekers and a community K-Market (a Scandi K-Mart, if you will).

Mhmm…Nuorgam is a chilly spot. There are regular snowfalls on the weather charts by October time. Max temperatures in December can be around just 33 F (1 C) – a maximum that’s only a whisker above freezing, imagine that? And the endless darkness that comes with the latitude only makes matters worse.

Tankavaara is the Wild West of Finland, only without the dusty canyons and the sun-scorched deserts. Here, the badlands are replaced with snow-caked plains and the cacti-spotted gorges are switched out for ice-blasted arctic tundra. But there is gold. In fact, Tankavaara is the gateway to the iconic Finnish gold fields, where people have been panning for the precious metal for decades.

If all that piques your interest, be sure to pay a visit to the acclaimed International Gold Museum. It not only chronicles the gold rush of Lapland that began in the 1930s, but also the gold rushes of North America and the rest of the world. Alternatively, head straight over to the Tankavaara Gold Village to start learning the art of panning for yourself.

Thing is, no amount of striking it rich will help you dodge the cold in these parts. Plunged into darkness for almost half of the year, Tankavaara is a place where the thermometers can seem stuck on sub-33 F from November to March. Summers are warmer, but things rarely heat up above the 70s.

Forward-thinking and tech-heavy Oulu is widely seen as the capital of Northern Finland. It’s one of the largest cities in the upper half of the country, sat on the sloshing salt waters of the Bay of Bothnia facing Sweden across the strait. Although not a part of icy Lapland, the border of that famous region is only a short drive to the north, so you can expect things to be pretty cold here.

Daily mean temperatures for the 365 days of the calendar sit around the 38 F (3 C) mark but record lows have hit less than 35 under (that’s 37.5 C under). That gives Oulu a subarctic continental climate and makes it one of the biggest urban conglomerations in the world officially within that chill-inducing classification.

Oulu is famed for its cutting-edge computer companies and tech start-ups (many no doubt making use of the natural server cooling provided by the outside air!). It’s also the birthplace of the Air Guitar World Championships, which take place in the slightly balmier month of August, when thermometers usually manage something in the range of 55-65 F.

Sodankylä has been officially crowned as the coldest place in Finland a few times in the past. It’s easy to see why. The tiny little settlement makes its home just north of the Arctic Circle, at more than 65 degrees north in the very depths of Lapland. The official Visit Sodankylä website primes it as the land of “dazzling aurora borealis and the midnight sun” – it’s not wrong.

It’s very dark here from autumn onwards. The sun only peeks above the horizon for a matter of minutes each day in December, while there’s complete Polar Night (a phenomenon that means nighttime actually lasts longer than a full day) from December 20th to December 23rd. All that makes this a top location for chasing a sighting of the Northern Lights, although you will need the thermals to do it…

Yep, Sodankylä is cold. The daily average for the whole year is just a smidgen under 32 F (that’s -0.4 C!). Wintertime low records are blisteringly freezing, though, with thermometers dropping to a whopping -57.1 F (-49.5 C) on occasion. This is also snow country. Huge, impenetrable snowdrifts cover the whole valley around town from November onwards, and scientists say that they are getting stronger as a result of global warming.

You’ll only need to take one look at the colossal Sampo Icebreaker that lies in wait in Kemi port to know that it gets cold in these parts. Seriously cold. A hulking vessel with a juggernaut of a hull, it was built way back in 1961 to crash through the frozen Arctic waters and clear the shipping lanes for less-muscular boats.

Sadly, the Sampo can’t do much for the ice and snow that besets the town center of Kemi for much of the year. It starts around October and won’t let up until March time at least. We’re talking meters and meters of the stuff. In fact, it’s enough to construct the largest snow castle in the world: The SnowCastle of Kemi, which has a 20,000-square-foot footprint and even hosts a luxury snow hotel for those who really want to feel the chill!

Kemi also happens to be a great gateway to both Sweden (the border is a mere 12 miles up the highway) and the more touristy areas of Lapland (where you can go to meet Santa Claus and see the reindeer herds, but more on that later).

Tohmajärvi catapulted itself like a well-rolled snowball onto the league table of the coldest places in Finland back in the 2010s by regularly hitting meteorological news for having one of the longest continuous runs of subzero temperatures in the country. Back in January 2016, the little town on the fringes of Russia saw an average of -7.6 F (-22 C) for the whole month, and things virtually never managed to get above the freezing mark. Brr!

But Tohmajärvi isn’t isolated up in the depths of northern Finland like many of the other spots on this list. It’s actually much closer to Helsinki and the more lived-in corners of the country than you might expect. However, it is to the east, meaning there’s a bigger influence from continental weather systems that can bring very cold air across from the Russian steppe and Siberia during the winter months.

Tohmajärvi itself is pretty tiny. You’ll find just a cluster of wood-paneled cottages nestled between pine woods. However, there is an abundance of cross-country skiing routes on the menu for those who do decide to stop, and it is smack dab on the so-called Blue Highway, which runs all the way to Norway in the west and into Russia in the east. Road trip, anyone?

Rovaniemi has to be one of the best-known of the coldest places in Finland. Why? Well…it’s the home of Santa Claus himself. That’s why! Every five-year-old everywhere in the world should know about it. And so should you, because it’s smack dab in the heart of Lapland, is the official capital of Lapland, and comes hemmed in by some of the most stunning Arctic scenery on offer anywhere in Europe.

But before you go to check if you’re on the naughty list or the good list, there’s some meteorology to get out of the way. That comes courtesy of the excellent and informative Arktikum, a museum that’s dedicated to all things Arctic Circle. Inside, you’ll get to see statues carved by Inuit people and walk the so-called Gateway to the North – a long glass tube that opens to let in the Northern Lights whenever they’re working.

Then you can move on to the must-see Santa Claus Village. That’s where you’ll meet the bearded present giver and Mrs. Claus, and where you can hop on safari trips to witness reindeer herders doing their thing. Wrap up warm for all this, folks, because Rovaniemi’s temperatures average a humble 34 F (1.1 C) for the year. No wonder Santa has a big red coat, eh?

The coldest places in Finland – a conclusion

The coldest places in Finland are largely up in the depths of the Arctic Circle, far away from the buzzy streets of Helsinki and the warming coastlines of the Baltic Sea. However, you will also find places that get cold air from Russia on the east side of the country, along with bigger cities facing the Bay of Bothnia where it rarely makes it above freezing in the winter.

Is Finland Expensive: 2022 Money Guide to the Nordic Nation 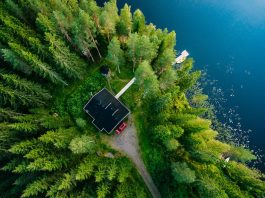 5 Luxury Holiday Destinations in Finland You Must Visit 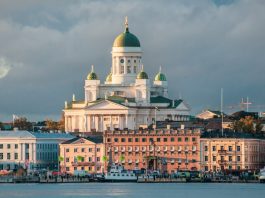 One Week in Finland: The Perfect 7 Day Itinerary