Home Europe Denmark Is Denmark Worth Visiting? 9 Reasons The Answer is Yes

The Scandinavian archipalegic country of Denmark is known for its great quality of life, cobblestoned medieval towns and artsy capital city. It might be one of the happiest places in the world to live, but is it worth visiting?

Comprising the Jutland peninsula and over 400 islands, Denmark is a picture of Scandinavian life, but it’s a lot more than its northern light retreats, fairy tales, and Viking origins. Colorful harbors, royal palaces, and more beer than you could imagine, Denmark has left behind its overwhelmingly rural past to enter the 21st-century and it definitely deserves a place on your travel bucket list.

From the people to the food, the galleries and the architecture, there are tons of reasons to visit Denmark, but this guide looks at just a snapshot of what this diverse country has to offer. It seems Scandinavians have perfected the western way of life so it’s high time we let you in on their secrets. Let’s go.

Denmark’s capital is the most popular tourist destination in the country, and for good reason. A coastal city spread over the islands of Zealand and Amager, Copenhagen is one of Europe’s oldest metropoles and is linked to northern Sweden by the Oresund Bridge.

Copenhagen is colorful and magical, with an effortlessly romantic atmosphere. It dates back almost 1000 years. Once a small fishing village, it is now a modern European capital, tourist magnet and idealized image of city life from which other cities take inspiration.

Undoubted historical highlights include the palaces and castles of Royal Amalienborg, Bernstorff, Charlottenbord, and Chrottenlund. You can find most of these on Slotsholmen island in the city center, also the political center of Copenhagen known as “Castle island”. You’ll find tons of green spaces, medieval buildings, clock towers and iconic statues all over the city, including the famous “Little Mermaid” sculpture on stone.

Copenhagen has a modern infrastructure, humid maritime climate and high quality life. It is the best place to visit in Denmark, especially at Christmas, and is a reason as good as any to take a trip to the country.

Since the cycling revolution in the 1990s, Denmark has had a great infrastructure for cycling with a mostly flat landscape and developed bike routes connecting all the cities. Cycle bridges dominate over traffic lines and bike rental is widely accessible, although most residents own a bicycle.

It’s the preferred mode of transport for commuting and daily life, but it’s also ideal for sightseeing and exciting for tourists visiting Denmark. The country is relatively small and touring Denmark on a bike is a real adventure, but it is also the most convenient and cheapest way to get around the capital day to day.

Enjoy the cobble streets and cool breeze and forget sitting in traffic or walking polluted sidewalks while breathing in clouds of fumes. The cycling in Copenhagen is environmentally inclined, but also great for public health, and a real spectacle for visitors.

The Galleries and Museums

Denmark is an artistic country and one with a long history spanning thousands of years. This is why it will come as no surprise that it is home to a long list of great museums and galleries covering a variety of movements, eras, and events.

From Viking society and maritime history to Denmark’s Golden Age and contemporary art movements, Danes have documented it all. The Louisiana Museum of Modern Art, the National Gallery of Denmark and the Thorvaldsens Museum stand out in the capital, but Aarhus’ culture scene also shouldn’t be missed.

Traditional Danish cuisine is simple and rustic. Rooted in peasant food popularised before the Industrial Revelution, most national dishes are centered around what can be grown from the land like rye bread, root vegetables, porridge and canned meats. Scattered with fishing villages, seafood is also big in the Danish diet and the food culture remains true to its humble past.

From “Stegt flæsk med persillesauce”, the fried pieces of pork belly served with boiled potatoes and bechamel sauce, to “Smerrebrod”, the large pieces of buttered bread served with fried fish, liver pate or potatoes – the food is a journey through Danish history and something all visitors needs to sample.

The Danes love their beer. Whether they’re lazing around in a park, waiting for a meal, or even riding around on their bikes, there is always a can in hand or bottle being balanced. Still, it’s not only the culture and the availability of great beer that makes Denmark worth visiting.

You’ll likely know iconic names like Carlsberg and Tuborg which are actually brewed in Denmark. There’s also tons of small breweries, most of which tourists can tour and where you can enjoy beer tasting experiences. The history and tradition of beer-drinking goes back thousands of years in the nation and is closely tied to the culture. Even the Vikings were alleged big beer-drinkers and used it more than water.

You won’t find a wider variety of beers and brewing methods in any other country of the same size and the fascinating industry is a great reason to explore Denmark, whether you’re a big drinker or not.

It might rain over 170 days out of the year and temperatures barely exceed 20 degrees Celcius but the Danes are consistently rated the happiest people in the world, and that says a lot about the culture. Little corruption, years of successful democracy, reliable welfare benefits and a small population is seemingly the recipe for contentment. That and something Danes called “Hygge”, a word that cannot be translated into English but which refers to a peaceful and satisfied state of mind.

Danes have little demands and are happy with what they get. Comfort and safety is all part of the way of life and progress often isn’t measured by the development of the country’s GDP, rather happiness is valued higher. Although, it can’t hurt that Denmark also has one of the most developed economies in the world.

All these things make Denmark a wonderously appealing place to travel and live. If being born in Scandinavia is a winning ticket to a happy life, then who wouldn’t want to visit and be let in on their secrets? Spending time with some of the happiest people in the world can also only be a good thing, especially if the positive vibes rub off. The happiness of Danes also keeps crime rates low, personal safety high, and means the locals are welcoming and helpful to tourists.

From Viking military fortifications, through Roman, Gothic, Renaissance, Baroque and even the most contemporary styles, Danish architecture is elegant and diverse. Every corner of the country tells a different story about Denmark’s past and the spectacular buildings will impress any visitor.

Check out the Fredensborg and Frederiksborg Palaces, just north of Copenhagen, as well as Kronborg castle, known as William Shakespeare’s source of inspiration for Hamlet. On the modern architectural front, the Royal Library, the Royal Danish Opera House, and the fascinating Iceberg Building, an apartment block in Aarhus, are definitely worth visiting.

It might not be the first thing that comes to mind when you think of Denmark, but Danes know good music and the country is brimming with music festivals throughout the summer months. Nibe Festivals in northern Jutland, Copenhall Festival in the capital and NorthSide in Aarhus are just a few of highlights on the music scene and thousands of Danes flock to these festivals each year.

One of the largest music events in Europe, The Roskilde Festival, which is held in the city of the same name, is the Glastonbury of Scandinavia. Hosting 180 acts and 130,000 visitors over eight days, Roskilde is a non-profit event known for its international talent and sumptuous food stalls.

Winter is also a great time to visit Denmark for music and fesitivites. You’ll always find a bustling jazz-bar alive with saxophone sounds or a local pub with echoing karaoke. Eurovision is also a big event in the country celebrated by most Danes. Denmark submits an entry every year and it’s not uncommon for homes and drinking establishments to host parties when it comes around.

That Scandivanian minimalism is reflected in everything in Denmark from the interiors to the architecture, and especially the fashion. Danes are known for dressing smart and Copenhagen is dotted with boutique stores and high-end retailers. The country is also known for its innovative sustainability and you’ll find tons of eco-friendly brands and vintage pieces all over the country, and the catwalk.

Scandinavian style has also infiltrated the designer clothing market all over the world, with high fashion and even celebrity looks favoring minimalism and clean cuts. There are also some Dane designers leaving their mark on the international fashion world. It’s worth visiting Denmark just for the original stores of top names like Mad Norgaard and Henrik Vibskov.

How many days do you need in Denmark?

Denmark isn’t a massive country, but there are many experiences to be had across the diverse land. From the modern capital to the remote fishing villages and rolling countryside, you need at least seven days to get a real taste of Denmark, three of which should be spent in Copenhagen.

When is the best time to visit Denmark?

Denmark has a mild maritime climate but the long cold season can make for an unpleasant trip. Short days with little sunshine and average temperatures below 40 degrees Fahrenheit can be hard to navigate if you’re not familiar with the Scandinavian climate. But June, July, and August are great months to visit Denmark. It may be busiest with tourist crowds and high season prices, but the temperature hovers above 70 degrees and it is ideal for exploring the green landscape, crystalline lakes, Nordic coast and bustling city streets.

Is Copenhagen worth visiting?

Copenhagen is a vibrant modern hub and model capital city. The colorful houses, cobbled streets, varied architectures and crowds of cyclests are all worth seeing and you can get around a lot of Copenhagen in just a few days. You can walk everywhere, but joining the hoards of bikes is a must-do experience. The middle of town is also full of shops, restaurants, bars, and museums where you can learn about Danish history, enjoy local cuisine, and soak up the joyful environment. 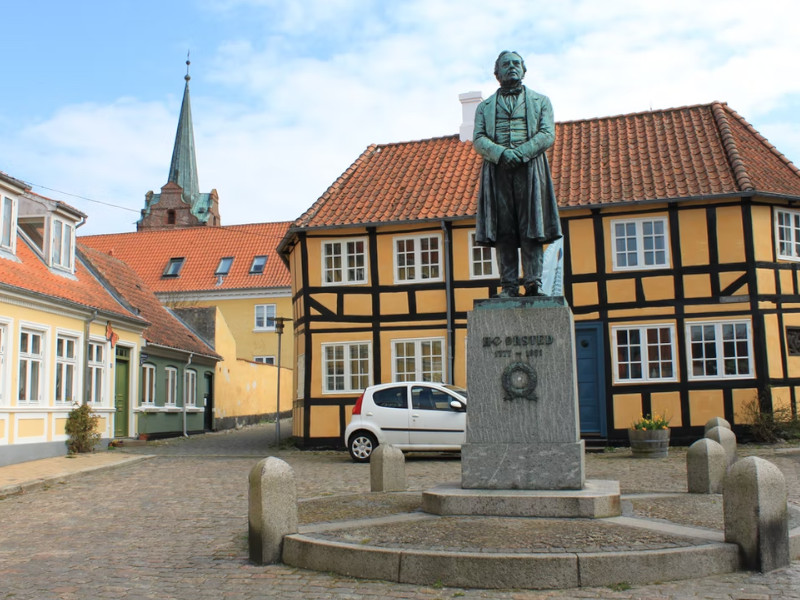 Budgeting in Scandinavia: The 5 Cheapest Places In Denmark 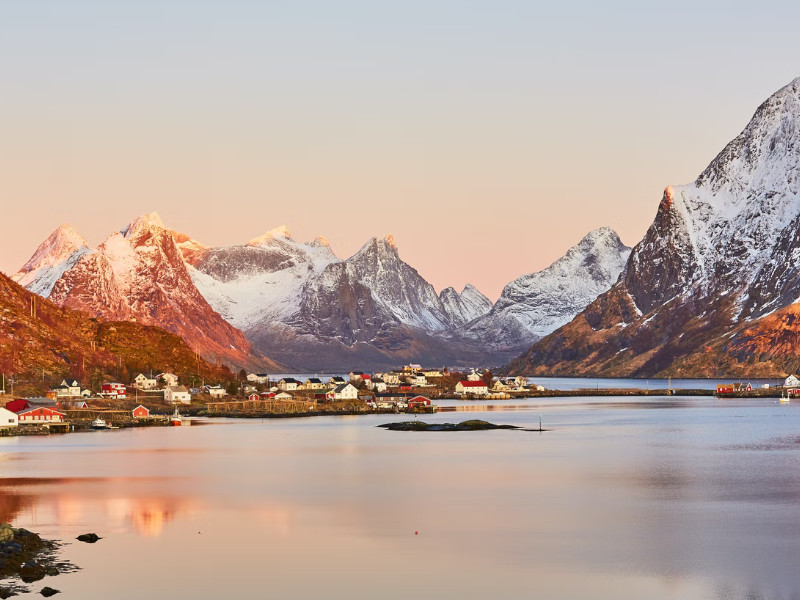 Where in Scandinavia? Denmark or Norway to visit this year?