Besides being home to the largest castle complex in the world, the city of Prague is best known for its vibrant beer gardens, affordability, breathtaking architecture, and boisterous festival roster. Nevertheless, there are some things to look out for if you decide to visit.

Prague is the birthplace of iconic author, Franz Kafka, and home to the oldest functioning clock on the planet, as well as one of the oldest bridges in Europe, making it an alluring tourist destination in all respect. In fact, this Central European gem is frequently described as ‘the heart of Europe’ and it’s more than deserving of a place on your travel bucket list.

Although having a thriving tourism scene that’s undeniably beneficial to the city, it’s given way to some challenges for visitors. Our guide includes everything to be wary of in Prague, and everything that’s best avoided to ensure you get the most out of your getaway. Let’s go.

This piece of advice might be a little surprising, but visiting the infamous Charles Bridge during the day is an activity that’s best avoided. As beautiful and historically rich as it is with its decorative statues and gothic style, it’s packed with tourists from late spring to early autumn, and this is especially true around midday.

This is partly due to the fact that crossing the bridge is the quickest route from the Old Town to Mala, but of course, it’s also incredibly scenic and a great place for photo opportunities. Naturally, this will have many of you left wondering what to do instead, but luckily, there are some alternatives.

For starters, you could visit the Strelecky Ostrov bridge instead, where you’ll have the chance to capture photos of Charles Bridge itself with the Castle behind it. Another option is to visit early in the morning or later in the evening. The bridge is still busy at night but the unique energy and different vendors make the crowds much more bearable. And if you visit early in the morning, you just might be lucky enough to catch the sunrise.

Waiting For The Astronomical Clock Show

While the age-old astronomical clock in the Old Town, near City Hall, is undeniably picturesque and worth seeing, many will tell you it’s best to do so when the astronomical clock show isn’t happening. Although that definitely isn’t to say you should skip seeing it all together.

The astronomical clock show may boast a dancing skeleton, and a crowing rooster, among other things, but you’ll probably have to contend with bustling crowds blocking your view, especially in the high season.

A popular alternative is to visit the clock outside of peak times, but you could also head to the nearby U Prince hotel and view the show from its rooftop terrace. After all, what could be better than admiring a historic monument with a cocktail in hand?

We know people dressed in ridiculous costumes can be intriguing, and even enticing, but the classical concert ticket sellers in medieval dress in Prague can be untrustworthy. Sadly, there are plenty of hawkers selling tickets to concerts at venues that aren’t concert halls with musicians who aren’t symphony orchestra players, under the pretense that they are.

As such, we recommend booking your tickets in advance through the official orchestra’s website if you want to see a performance. Prague has several performing orchestras to choose from. That being said, they typically take the summer months off, so try not to visit from mid-July to the end of August if this is at the top of your agenda.

Like any popular metropolitan area, certain spots in Prague are best avoided at night, and not just because of crowds. In Prague’s case, the infamous Wenceslas Square is one of these places. The chances of falling victim to crime are still unlikely, but prevention is always better than cure, so we recommend staying away during the evenings.

What once housed massive groups of protesters during the Soviet invasion known as the Prague Spring in 1968, is now home to gentleman’s clubs, and a thriving sex tourism scene, which can be unsavory for certain visitors, especially those traveling with young children. Needless to say, we suggest exploring the streets nearby instead if you need to pass through after dark or avoiding the area altogether by taking the metro.

If you’re like us, you might want to get a unique souvenir to remember your visit to Prague. However, the souvenir shops you’ll find in the city aren’t the places you’ll get them. Unless you’re after Russian dolls, ‘I love Prague’ caps, or poorly made knock-off Champions League shirts at extortionate prices, there are other ways to commemorate your European getaway.

Opt for true Czech-made souvenirs instead. The best way to do this is by visiting independent stores with handmade Czech products like jewelry, beauty products, or wooden toys. The eclectic Mint Design Market, which is held at the Prazska Trznice, near the Vltava River is a fantastic option, as is the weekend flea market on the banks of the river.

Karlova Street is another one of those areas in Prague that are best avoided, but not for the reasons you might expect. Due to its tourist popularity, it’s packed with visitors at all times of the day, and its pretty narrow streets make navigating it a little headache-inducing. What’s more, this makes you more vulnerable to the pick-pockets that operate in the area.

We think you’re better off steering clear of it entirely since the countless souvenir shops you’ll see here rob it of its old-world charm. Plus, there are plenty of other interesting streets with fantastic architecture that you could visit in the city, and most of them are less busy.

Consider a stroll through a 14th-century courtyard by passing through the Klementinum to the left of Karlova street, or visit the city’s historic Havel’s Market instead.

Pickpockets on the 22 Tram

The tram line is a very convenient way to get around Prague since you’ll get to see so much of the city at an affordable price, all while experiencing a slice of local life. Unfortunately, pickpockets are all too aware of this and take full advantage by working in groups on public transport routes.

The stretch from Karlovo Namesti to Prague Castle, known as the 22’s route, is particularly hot for petty crime. Typically groups create diversions while one of them steals your valuables, which means you will need to maintain heightened awareness at all times. It’s always a good idea to keep your bag or purse closed, and to be on the lookout for suspicious behavior since tourists are easy targets.

It’s a good idea to travel in a group of at least two or more at night, if possible, and you should never leave your valuables unattended. If you want to avoid the 22 tram, you could always opt for route 41 which is busier at night. Tickets are bought onboard from the conductor, so don’t worry about buying them in advance.

Exchanging Currency on The Street

If you’ve got Euros you’re hoping to exchange for Czech Koruna’s, you could find yourself face to face with street scammers. There are several exchange bureaus operating under false pretenses proclaiming zero commission fees with very attractive rates, but these are usually too good to be true.

Most will give you lower rates than the official exchange rate, but this could come with forged notes, hidden fees if you’re paying by card or even outdated currency from other countries.

Thankfully, there are official exchange offices you can use instead that offer good rates. These include Alfa Prague and Broadway Change, to name a few. Naturally, you could also opt to bring Czech Koruna with you from your bank back home, or take money out at a reliable ATM with a trusted brand name.

Last but certainly not the least important thing to look out for in Prague is taxi scammers. Annoyingly, over-charging taxi drivers are some of the most common scammers in Prague.

The majority of them don’t use meters, and this even includes supposedly ‘trustworthy’ companies with drivers generally quoting much higher fees than what might have been initially agreed upon. As a matter of fact, even Prague’s mayor has fallen victim to this in the past. For that reason, we think you would be much better off using apps like Bolt, Uber, or Liftago instead or asking your hotel to book a transfer for you with a set price.

Is it safe to walk around Prague?

Prague is an extremely safe city. In fact, it’s one of the safest capitals in Europe to live and travel and the Czech Republic, in general, demonstrates very low crime rates with a strong police force looking after the streets. No matter how late you venture out into the night, the city can be safe to navigate. Even though the metro stops at midnight, night trams and bus services operate around the clock and the old streets are well-lit.

When is the best time to visit Prague?

The spring months or early autumn are among the best times to visit Prague when the weather is mild but the city is less overthrown by crowds and you’ll get low-season discounts. Winter can get very cold in the city, but the festive period is also a magical time to visit, with Christmas markets and winter activities. Summer highs can reach 90 degrees, but bustling crowds can make Prague less pleasant and it is most expensive at this time of year.

How many days do you need in Prague?

There’s a lot to see in do in Prague. It might have a compact center, but you could spend weeks here and still not get bored. Still, four to five days is the perfect amount of time to get around all of the most popular sites, while getting a sense of local culture, without rushing, and savoring the cuisine. 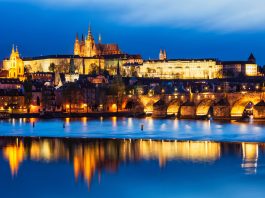 Is Prague Expensive? 2022 Money Guide to the Czech Capital