Home Europe Cyprus Is Larnaca Worth Visiting: 7 Reasons You Should Go 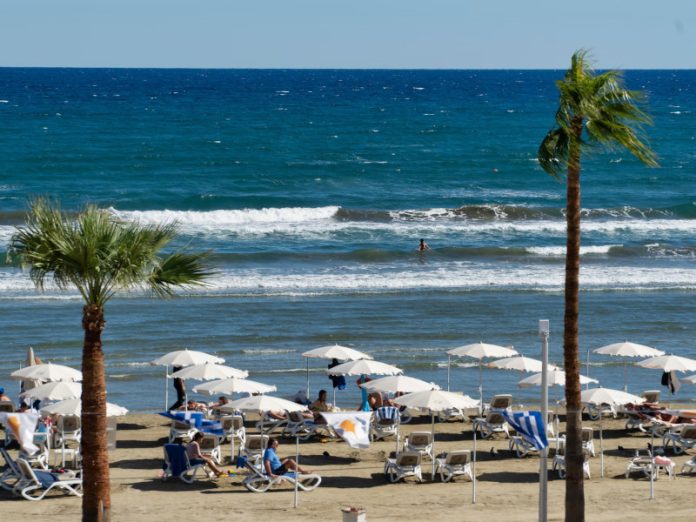 Is Larnaca worth visiting? Of course it is! This city has loads to offer, from lovely sandy beaches to interesting sights, vibrant nightlife to delicious food. There is absolutely no reason to skip it, and this guide will explore seven arguments to make this Cypriot city your next holiday pick.

Larnaca sprawls along a large bay on the southeastern coast of Cyprus. This region is often overlooked by travelers in favor of other picturesque destinations – the beach-party mecca of Ayia Napa, the turquoise waters of Coral Bay, or the historical sites of Paphos. However, Larnaca has a fantastic mix of attractions, hotels, and restaurants on its own, so don’t discount it before seeing what’s on offer.

This guide will try to answer is Larnaca worth visiting by giving a number of reasons to go there. We’ll look at how it’s one of the easiest places to reach on the island, has top accommodation choices, and access to some pretty stunning sands.

It’s the gateway into Cyprus

Larnaca airport is the main gateway into Cyprus. It’s the largest airport on the island, so the chances are that you’ll be arriving there no matter whether you’re hitting the beach parties in Ayia Napa or the historic sites in Paphos.

You can fly into Larnaca on a budget from many European destinations thanks to the number of low-cost connections. There are also a few long-haul flights to a couple of Middle Eastern destinations, including Doha and Dubai, too. That means that you can come from pretty much all over the world if you don’t mind a stopover along the way. You can also get a ferry across from Turkey.

The airport is right by the city, so it only takes around 15 minutes to reach by bus or taxi. Although Larnaca has plenty to offer, many people don’t hang around for too long. Instead, they head to places such as Ayia Napa, Paphos, Limassol, or other beach resorts along the shore. The good news is that Larnaca has good bus connections with the rest of the island, so you can easily plan those travels further afield if needed.

You may be asking yourself: “is Larnaca worth visiting for the beaches?”. We say, sure it is! The city sprawls along a wide, picturesque bay on the east of Cyprus. That part of the country is renowned for some seriously lovely beaches, many of them just a stone’s throw from Larnaca.

For starters, there are plenty of lovely beaches within the city itself, so there is no need to head out of town to bask in the sun. A long stretch of golden sands backed by cafes and bars is what you’ll find at Mackenzie Beach, which sits directly under the planes heading into Larnaca airport. Then there is Finikoudes Beach, right by the center. That has clear aqua and plenty of sunbeds beneath colorful umbrellas. It’s all lined by a bustling seaside promenade where you can dine and drink to break up the day.

You’ll find even better beaches if you venture a little further afield. Some of the best Cypriot beaches are within little more than a 30-minute drive. Touting pristine white sands and shallow turquoise waters, Nissi Beach is hard to beat. When the tide is low, a narrow strip of sugary sands leads to the picturesque islet of Nissi just off the shore. There is also Konnos Beach, a crystal-clear bay surrounded by pine-lined cliffs and hills.

Larnaca claims to be the oldest Cypriot city. It could be as much as 6,000 years old! Whether true or not, the town was built on the ruins of the ancient city of Kition, the birthplace of the famous philosopher Zeno of Citium. You can visit the archeological site to see the ruins or learn more at the Larnaka District Archeological Museum.

Head to the center of Old Larnaca and visit the Church of Saint Lazarus. It’s a beautiful limestone structure built in the 9th century to house the tomb of Saint Lazarus. That’s only a few minutes’ walk from the famous medieval Larnaca Castle and fort that loom over the azure Mediterranean waters.

For a glimpse of Cyprus from the past, take a stroll around the quaint Turkish Quarter in the Skala district. From narrow lanes dotted with whitewashed houses to small ceramic workshops, it’s one of the most charming neighborhoods of Larnaca. There are no modern hotels or seaside resorts, just cute, old-fashioned architecture.

Larnaca is a great base for exploring other parts of Cyprus. Not only is it one of the easiest places to access on this Mediterranean island, but it’s also well-connected with the rest of the country. There are many places you can visit from Larnaca in just one day, whether you have a car or not.

For starters, the Cape Greco National Forest Park is only a 45-minute drive from the center of Larnaca. There, limestone cliffs with sea caves meet crystal-clear waters. From hiking the trails with coastal vistas to kayaking, swimming, and snorkeling, there are many ways to explore this alluring place. Make sure to take plenty of sunscreen, though, because there’s not much shade.

Then there is historical Paphos. That has plenty of ancient ruins and archeological sites. Although it takes about 1.5 hours to drive there, you can also get in by bus. Limassol is also within an easy trip from Larnaca. It’s a vibrant town on the south coast with plenty of cafes and bars around an impressive medieval castle.

Larnaca may not be as wild as nearby Aiya Napa, but it’s definitely worth visiting for the nightlife. From stylish lounges to chic beach bars, bustling dance clubs to live music venues, Larnaca has it all. Just be prepared for a place that’s generally on a smaller scale than the hectic scenes you can get elsewhere on the island.

If you’re staying around the hotel zone, you’re only a short walk from the lively, pedestrianized Laiki Gitonia district by the Finikoudes promenade. There are plenty of buzzing party spots dotted around that place. Neon-lit Club Deep offers long nights with DJ-manned dance tunes. It’s open on the weekends and gets busy around midnight. If you’re after something more chilled, head to the hip bar Savino for some of the best cocktails in town and great live music acts. Wine connoisseurs will enjoy the ambient Vinaria that serves delicious tapas alongside the drinks.

There is no shortage of beach bars for day drinking, either. The best ones are around beautiful Mackenzie Beach. From wild parties at chic Ammos or Lush Beach Bar to colorful cocktails at boho Nusa Beach Bar, you’ll be spoilt for choice from midday onwards.

The sights and attractions

Larnaca is not only worth a visit for the beaches and the historical sites but also for plenty of other attractions that draw the crowds. There is a sunken ship just off the coast, not far from the harbor. The MS Zenobia Wreck, which capsized in 1980, is a diver’s paradise. If you have your scuba diving qualifications, you won’t find a better place to go under across the island.

You can head off the beaten path to Larnaca’s Salt Lake. It’s especially worth it in the winter when the water becomes home to a large population of migrating flamingos. In the summer, the lake is often completely dry, with only a salty residue left. It’s also possible to drop by the magnificent Hala Sultan Tekke mosque that sits on the edge of the water.

Cypriot cuisine has been heavily influenced by Greek, Turkish, and Italian cooking. With such a good blend and the fresh and rich ingredients that come with a Mediterranean climate, it’s no surprise that the food here is a feast for the palate. And let’s not forget that Cyprus gave us halloumi cheese!

Larnaca is home to a range of excellent restaurants that suit all sorts. There are plenty of eateries that serve local delicacies, but there is also no shortage of international diners.

If you want to try authentic local cooking, head to To Kazani. You’ll instantly be hit by the white-and-blue color scheme and the traditional décor. Make sure to try their specialty souvlaki. There is also Alonia Tavern Livadia, a small, family-run joint with an atmospheric courtyard. We recommend going for the mezze there so that you can sample more than one thing.

If you want to taste something different, head to Maqam Al-Sultan Restaurant on the seafront for the best Lebanese food with a Cypriot twist. Also, check out chic Pizzeria 485° for Neapolitan pizza made in the style of south Italy.

Is Larnaca worth visiting? The conclusion

Is Larnaca worth visiting? We say it certainly is! There are lots of reasons why Larnaca is a great holiday destination. For starters, it’s super accessible and well positioned to explore other parts of this wonderful island. The urban beaches may not be the best on offer in Cyprus, but they do have soft sands and promenades packed with cafes and bars. There is also no shortage of interesting sights and attractions, so you won’t have much trouble filling your itinerary. Plus, there are plenty of great restaurants and nightlife venues to enjoy after a long day in the Cypriot sun.