Our ultimate Koh Samui 5 days itinerary can help you explore this fabled isle in the bath-warm waters of the Thai Gulf to the absolute fullest. It includes all the highlights that make it such an uber-popular destination, from the shimmering beaches and their drooping palm trees to the see-through seas and the ramshackle beer bars that crown the cliffs.

Yep, this quintet of days takes you through the most famous resort towns the island can muster, from buzzy Lamai to the shady sands of Maenam on the north shore. It’s also got moments of meditation in Buddhist temples, days of snorkeling and swimming in pristine coral reefs, and even a bout of hefty Koh Samui nightlife for the hedonists.

Our Koh Samui 5 day itinerary starts on the southeast coast of the island and bends around to the northwest. You could easily flip it and do it in the other direction if you like. It’s also all doable without your own car or scooter but having a rental will certainly make getting from A to B much easier. Happy travels!

We kick off this Koh Samui 5 days itinerary with a bout of hard-earned R&R. It comes courtesy of probably the second best-known resort on the isle: Lamai. It’s on the southeastern shoreline, fronted by perfect gold-white sand beaches and clusters of towering coconut palms. Try to score yourself a hotel by the water’s edge – the modern The Hive Hotel and the well-rated Lamai Coconut Beach Resort are two of our favorites, and both come with pools!

As you might have gathered, the main thing to do here is to laze on the beach. Thankfully, that’s just a short walk away from most parts of town. It’s known, aptly, as Lamai Beach, and it runs for about 1.8 miles from north to south, so there’s plenty of room to spread out and relax, even when there are lots of people around. Talk about the perfect place to combat the jet lag, eh?

If you do happen to want to break up the sunbathing session with something a little different, be sure to walk down to the south end of the beach. That’s where you’ll find the curious anthropomorphic rock formations of Hin Ta Hin Yai (the Grandfather’s Grandmother’s Rocks). We’ll let you decipher how they got the name! You could also hit Thanon Had Lamai, the main drag in the town, where bars and souvenir shops abound.

Come the evening, there’s nowhere better than the Hin Ngu Viewpoint. It’s a 35-minute walk up from the beachfront, but offers a sweeping, 180-degree panorama of the whole bay and the sandbanks of Hua Thanon beyond. Just below is a great bar and rest point called Lamai Viewpoint, for those cold Chang beers with visions of the gulf.

Chaweng Beach is the busiest resort on Koh Samui. Some say it’s gotten far too big for its boots. We say it’s the perfect place to feel the pulse of the island. It’s not far from Lamai at all. A taxi should take about 20 minutes in all. The fare should be around 350-450 THB ($10-13.30). We’d recommend seeking out a hotel that’s a little off the main road running through the heart of the resort, as things can get noisy there – both the uber-opulent The Library and the more budget-friendly Samui Beach Residence Hotel are good options.

Again, it’s the beach that takes center stage in these parts. Longer than Lamai, it’s a whopping 2.5 miles from end to end. The north part is the most built-up. You can go there to rent sunbeds and hop beach bars. The southern side of Chaweng Beach is emptier and the sands are wider, and there’s usually just a few volleyball courts to break things up.

If you’re feeling active, then it’s worth knowing that Chaweng Beach is home to one of the widest arrays of diving outfitters on Koh Samui. They offer PADI courses and test dives and excursions for all levels. It’s a full-day undertaking (or even more) and basic courses usually cost in the region of $200 per person. However, it is a chance to see the incredible underwater world of the Thai Gulf – think glimpses of sea turtles!

To end the day, Chaweng offers some of the most raucous nightlife of all. Hit the Chaweng Walking Market to shop and devour islander street food. Then, make for legendary names like Cha Cha Moon, Hush Bar, or the Green Mango Club; all spots where you can party into the early hours.

Bophut is also known as the Fisherman’s Village. That’s because it was once just a sleepy settlement of salt-washed fishing cottages and bobbing boats. Today, it’s sort of rising to become the number one tourist hub of the Samui north coast, which means there’s an ever-increasing range of hotels, restaurants, and bars to get stuck into.

It also happens to be a fantastic location to explore the so-called Golden Triangle part of the island. That’s a string of gorgeous beaches and hotel-topped headlands that pokes out of the northeastern coastline. It’s an area riddled with fantastic sights and attractions. To reach them, you’ll either need your own scooter (but be sure you’ve got all the right documents and whatnot), a driver for the day, or an organized tour lined up.

Heading east out of Bophut village, you can check off the sights in this order:

Head all the way back to Bophut for the evening of day 3 of our Koh Samui 5 days itinerary. There’s a fantastic night market there – the Fisherman’s Village Night Market – where you can sample seafood broths and noodles for hardly a dollar a dish. The main street parallel to the beachfront also has a particularly lively nightlife offering.

Maenam is one of the less-trodden corners of the island. It promises to slow down the pace of our Koh Samui 5 days itinerary and offer some quality time on the edge of the gulf. But first…adventure awaits…

Yep, the road between Bophut and Maenam offers ample opportunities to veer off and explore the inland hills. There’s all sorts in there, from gushing waterfalls to pockets of wild jungle to lookout points with incredible panoramas over the beaches below. We can recommend the following:

When you’re done touring the hinterland of Koh Samui, drop back down the roads to the north coast. That’s where Maenam awaits. It’s a long beach that gets progressively more relaxed the further you go from Bophut. It’s a prime place to bag a bungalow hotel right on the beach – we especially like Hanalei Gardens and Bangpo Village.

The culmination of our Koh Samui 5 days itinerary isn’t actually on Koh Samui itself. Instead, we recommend booking a full day’s tour of the incredible Angthong National Marine Park. That lies just off the coast to the west and can be accessed by boat out of the port of Nathon. It’s one of the jewels of the Thai Gulf, offering glimpses of totally undeveloped islets that are covered in lush coast jungles and filled with macaques and tropical birds.

The best tours are on fast speedboats. They should let you fit in more of the 42 karst islets. Most packages include stops for lunch on the beach, swimming in turquoise lagoons, and snorkeling off the side of the boat. Specific highlights of a day that we think you’ll want to make sure are on the itinerary include:

You’ll return to the port town of Nathon on Koh Samui’s west coast come evening. That’s a great place to be if you want to continue on to other islands in the gulf, including the diving mecca of Koh Tao. It’s also great for catching boats back to the mainland and the ports of Surat Thani, where onwards trains can take you back to Bangkok. 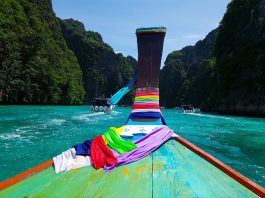 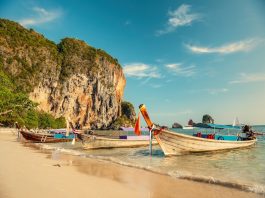