Home Asia Cambodia The 9 Most Dangerous Snakes in Cambodia

Home to the awe-inspiring temple, Angkor Wat, Cambodia is a favorite on any Southeast Asia itinerary. However, while we could go on about the culture, history, and sheer beauty of this nation, it’s a little something different we need to talk about here. Yep, that’s right, this is a list dedicated to one of the most fearsome of creatures, the dreaded snake.

And you might be less than pleased to know that Cambodia is home to quite a few of these spine-chilling slitherers. While you probably won’t see them going about your daily tourist sightings, there is a possibility of meeting one of these bad boys off the beaten path.

So, if you’re the adventurous trekker type, you might want to listen up and take note. We’ve compiled a list of the nine most dangerous snakes you wouldn’t want to mess with. From how to spot them to what to do if bitten, we have you covered.

First up, we have the blue krait. Also known as the Malayan krait, it is endemic to Southeast Asia and is highly venomous. It is found mainly around water sources, with a preference for rocky areas, rice fields and forests, however, there have been sightings in villages and even cities. But the good news is that it is nocturnal, so it will probably be settling down for its beauty sleep, just as you’re heading out for the day.

With a pattern of black and white bands on its body, its convict uniform-like skin makes it fairly easy to spot. Although being a shy species and generally avoiding confrontation, it can give a mean bite if provoked. In fact, nearly 50% of blue krait bites result in death if not treated promptly. How is that for an unsettling statistic?

Also known as the Thai spitting cobra or Siamese spitting cobra, this snake is mainly found in lowlands, woodland, and jungles. But be warned, it is also attracted to human settlements, due to the abundant rodent population that can provide for a hearty meal.

It has a relatively thin body compared to some other cobras and can vary in color, from greyish to brown and black, usually with white spots or stripes. Another nocturnal species, this guy shouldn’t give you too much bother if disturbed during the day. However, watch out if you anger it at night, as it is known to be much more aggressive during this period.

Displaying its hood and spitting venom (as the name suggests), this can be an intimidating, and potentially deadly experience for any traveler to succumb to. And if ever a victim of this snake’s lethal spit, you should close your eyes, as there have been reports of an unlucky few suffering permanent blindness as a result. However, if contact with the eye does occur, immediately wash out with fluid, such as water, saline solution, or milk.

The King Cobra is definitely one not to be messed with. Being the longest venomous snake in the world, reaching average lengths of around 4 meters, this nasty piece of work can deliver a colossal amount of paralysis-inducing neurotoxins. Endemic to the jungles of Southeast Asia, you likely won’t have to worry too much about running into this one, unless you are seeking a real Indiana Jones-type adventure on your next vacation.

But, despite its feared reputation, the King Cobra is generally very cautious and only tends to attack if cornered, protecting its eggs or in self-defense. If any of these things do occur though and a bite is inflicted, immediate medical help is crucial. Unless antivenom is administered quickly, fatality can occur in as little as 30 minutes. In fact, the bite of this guy is so powerful that even elephants have died within a few hours.

This vibrantly green guy is certainly recognizable, however, amongst the lush vegetation that it likes to reside in, it might be harder than you think to see one coming. Although small, only reaching lengths of 32 inches, the white-lipped pit viper can still be a frightening snake to encounter.

Usually found hanging upside down on trees, it waits for its prey and strikes at rapid speed. And unlike other snake species, it holds onto its prey, waiting for it to succumb to the venom.

Although human fatalities are fairly rare from their bite, they are still an unpleasant experience that you would definitely want to avoid on your travels.

With a preference for water-based habitats, such as swamps, marshes, and paddy fields, the monocled cobra, (also known as the monocellate cobra), is widespread across South and Southeast Asia. With a distinctive O-shaped pattern on its hood, this guy can reach a maximum of 2.3 meters, so a fairly intimidating presence to encounter.

However, it’s the neurotoxic venom that makes this snake one to steer clear of. A bite from one of these can be fatal within an hour, and if you’re out in the middle of nowhere, that’s not something you would want to take a chance on.

So, when out and about on your travels, stay very alert. And if you do happen to catch a glimpse of this guy, look out for signs, such as hissing loudly, raising its body, or spreading its hood, as this may mean a strike is imminent.

Ahh, the Russell’s viper. Found throughout Asia, this deadly snake is a regular on the most dangerous snakes lists. It is responsible for the majority of snake bites in several Asian countries including Sri Lanka, India, and Burma. While it is the monocled cobra that is considered to cause the most fatalities in Cambodia, the Russell’s viper is still found around these parts.

Attracted to human settlements, due to its fondness of rodents, this viper has a distinctive coat of brown spots with a dark outer ring, and triangular, flat-shaped head. Although moving sluggishly during the day, don’t be fooled, as they can strike at incredible speed if threatened. And these guys are known to be incredibly hostile, so best not to mess around if you ever find yourself face to face with one.

Being the largest species of krait, reaching lengths of 2.7 meters, the banded krait can be easily identified by its black and yellow crossbands. They can be found in a variety of habitats, including forests, open plains, and human settlements.

However, these wasp resembling snakes are shy and generally like to keep hidden. In fact, so much so that they take over burrows dug by other animals. Perhaps rude to the homeowners of their new hideaway, but the good news for humans is that an encounter with one is very unlikely. But now onto the bad news – if an encounter were to occur, it’s not likely to be a pleasant one. This highly venomous snake can cause unrecoverable loss of nerve function if not treated in a timely manner.

With a reputation for being bad-tempered and quick to strike, the Malayan pit viper is another one to put on your avoid list. Generally sticking to dry, flat areas, it is known to be quite the lazy type. However, what makes it highly dangerous is its unpredictable nature. While being calm one minute, a mean mood swing can occur the next, making it violently lash out.

Although usually coiled in an S shape, making it look deceptively smaller, don’t be fooled, as it can reach great distances when striking. And if it gets you, let’s just say the outcome is not pretty. However, like the majority of snake bites on the list, the key is quick reaction. So, the sooner you seek hospital treatment the better.

Even though deaths are not as common from this type of snake, the loss of the part of your body where the bite occurred has been known to happen. So, if you want to get home from vacation with all your fingers and toes still intact, keep well away from this troublemaker.

With its distinctive red neck (hence the name), the red-necked keelback certainly sticks out like a sore thumb. Endemic to Asia, this little guy may not be threatening in terms of size but its bite sure packs a punch. Originally thought to be harmless, their classification was upgraded after a fatal bite led to the investigation of their venom, which was found to be highly poisonous, leading to internal bleeding, including the brain.

It is found most commonly near freshwater, including swamps, creeks, and dams, where it likes to enjoy a diet of frogs and fish. Defensive behavior from this guy includes spreading out its neck to appear bigger, lifting its head and neck 4 or 5 inches off the ground, and, on rare occasions, secreting poison from the back of its neck. However, as it is not aggressive by nature, this only happens when extremely provoked. That being said, most snakes are probably best to steer clear of anyway.

What is the most dangerous snake in Cambodia?

The king cobra is the most dangerous snake you could encounter in Cambodia, and, in fact, one of the most venomous in the world. These intimidating serpents can lift a third of their body off the ground and look you dead in the eye when threatened. A bite from one of these guys will not go down well, as they possess potent neurotoxic venom, which can be fatal in as little as 30 minutes.

What is the largest snake in Cambodia?

The largest species of snake found in Cambodia is the Burmese Python. They can grow up to five meters in length. However, the good news is that they are non-venomous creatures, therefore a sighting of one of these guys shouldn’t induce too much fear. Of course, that’s not to say they aren’t dangerous in other ways. With the length and weight they carry, let’s just say a hug from this guy might not be the gentlest.

Does Cambodia have lots of snakes?

There are 17 species of venomous snakes and roughly 12 non-venomous species in Cambodia. However, if those numbers freak you out, then you’re in for a bit of a shock if you enter Cambodia’s next-door neighbors, Thailand and Vietnam. Both these countries are home to over 200 species of snake, so Cambodia is a much safer bet if you’re harboring a pretty serious snake phobia.

But it’s not just snakes you must be wary of in this part of the world. Check out our list of the 7 Most Dangerous Animals in Cambodia. 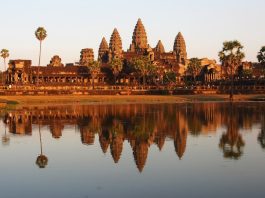 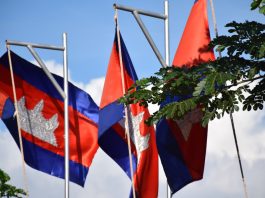 Is Cambodia Expensive: A Complete Guide To Spending There

Thailand vs Cambodia: Which is Better to Visit?